Further entries have been received for the inaugural Touring Car Cup, part of the FIA Motorsport Games, which will be held at Vallelunga Circuit near Rome from 1-3 November this year.

Following the initially received entries from 11 different countries, further nations have committed to the “tin-top” part of the event, with Kuwait, the United States of America, Slovakia, Sweden and Switzerland forming the five that have confirmed their participation this week.

The addition of extra countries to the previously registered 11 brings the total number the TC Cup competitors to 16, strengthening the grid both in terms of quantity and quality.

Slovakia will be represented by one of the best know racing drivers the country has ever produced: Mato Homola. The 25-year-old has been racing touring cars internationally since 2012, having started at the age of 18.

Homola’s experience ranges from S2000 cars to the TC1s used in the World Touring Car Championship and several models of TCR-spec machinery. He’s also a World Touring Car Cup race-winner and, behind the wheel of his usual drive – the Hyundai i30 N TCR – should be in contention for a medal position.

22-year-old Jessica Bäckman will be sporting the colours of her native Sweden. The female racer is a proven touring car all-rounder, having recorded podium finishes in the European, Scandinavian, German and British TCR championships. Driving a Target Competition-run Hyundai, Bäckman will surely be looking to add an FIA Motorsport Games medal to her list of achievements behind the wheel of a TCR car.

Mason Filippi, known for his class-winning exploits in North American touring car series TC America as well as IMSA’s Michelin Pilot Challenge, will represent the USA. For the FIA Motorsport Games, the 21-year-old will switch Hyundai models to drive the i30 N as opposed to the Veloster that he uses on a regular basis.

Switzerland will be represented by Jörg Schori, who will bring an Opel Astra TCR to the competition, adding another brand to an already diverse grid. The experienced racer has been racing touring cars since the days of the Super Touring category and is no stranger to TCR competitions, having made appearances in both in the German and Italian series.

Salem Al Nusif will carry the flag of Kuwait on his Audi RS3 LMS run by Comtoyou Racing, an outfit with WTCR experience. Al Nusif’s younger brother Mohammad is set to contest the Formula 4 Cup.

Sporting Regulations for the FIA Motorsport Games are available at fia.com. 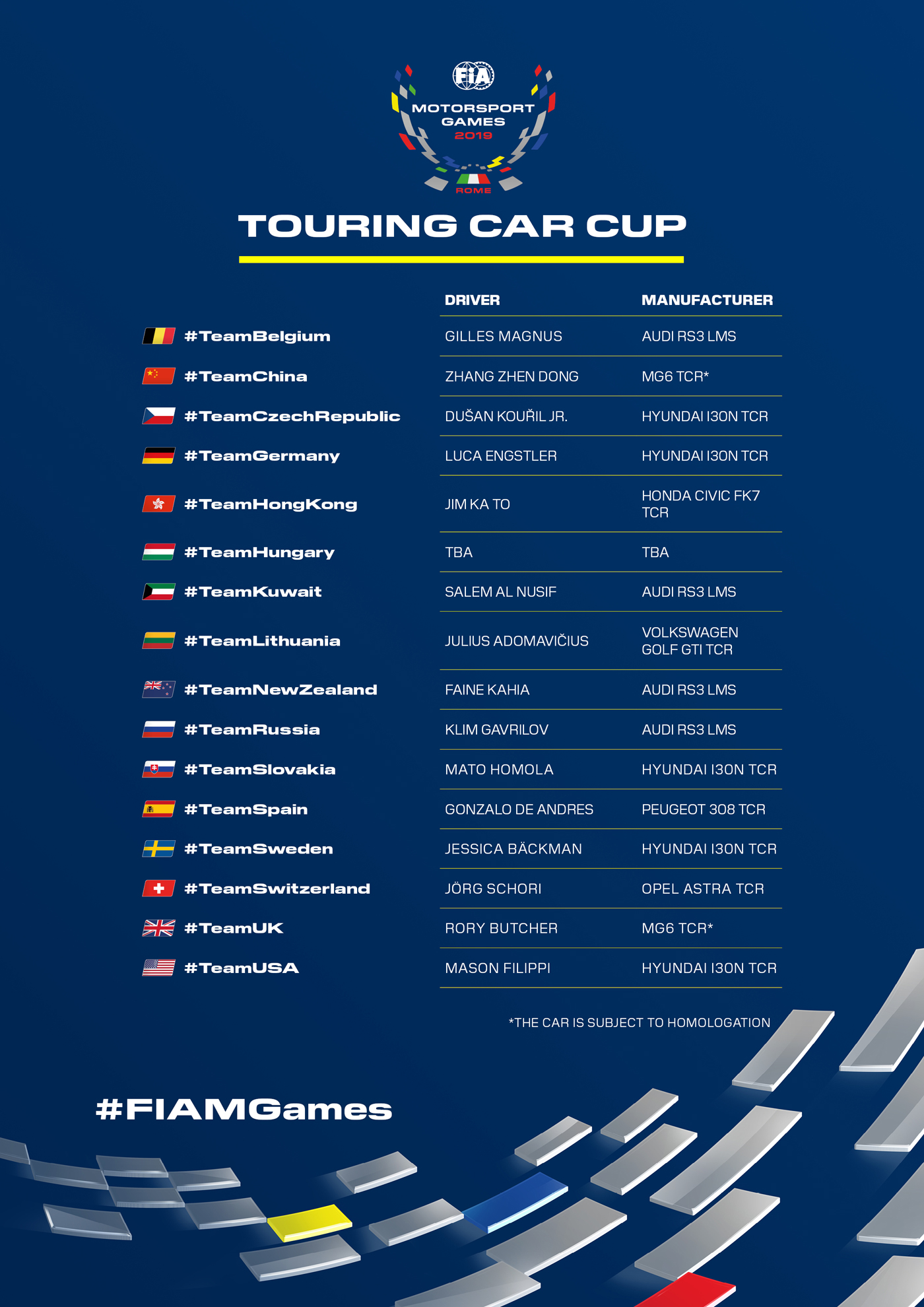