With the countdown to the inaugural FIA Motorsport Games now entering its final week, the provisional detailed timetable for the new multidisciplinary event has been revealed.

While on-track action will take place from 1-3 November, the opening ceremony will be held in the heart of Rome on the evening of Thursday 31 October.

Attention shifts to Vallelunga Circuit on Friday with opening practice for the GT Cup contenders getting underway at 10.00, while the Digital Cup free practice session will begin at 10.00 and run throughout the day. The Formula 4 Cup (11.30) and Touring Car Cup (12.25) will also embark on their first practice runs, while the afternoon will feature second practice outings for the GT Cup (13.05), Touring Car Cup (14.35) and Formula 4 Cup (15.15).

Practice for the Karting Slalom Cup will begin at 14.00 on Friday, with 29 mixed female-male teams given three hours of preparation for what promises to be an intriguing contest. Once the circuit-based categories have concluded their day, the Drifting Cup will stage its practice session at 16.20, utilising part of Vallelunga’s main straight and the complex between turns 10 and 14. The category will then undertake a qualifying session at 18.15, deciding the 16 contenders who will go for gold.

Saturday promises to be the busiest day of the weekend, with a mixture of practice, qualifying and race action taking place. The excitement will build throughout the day, culminating in the first medals of the 2019 FIA Motorsport Games being awarded in the evening.

The opening on-track session will see the Touring Car Cup contenders tackle the first of two qualifying runs bright and early at 08.30. The Karting Slalom Cup hopefuls will begin another round of practice from 09.00, which will roll straight into qualifying for the discipline's main event on Sunday.

A further three qualifying sessions will complete a busy morning at Vallelunga, with the Formula 4 Cup challengers on-track at 09.10, the GT Cup contingent getting underway at 09.45, and the Touring Car Cup staging its second run from 10.45. There will be further entertainment beginning at midday as the Digital Cup competitors undertake further practice runs and qualifiers.

The first racing action to take place on the main Vallelunga Circuit will see the Formula 4 contenders tackle their 20-minute qualifying contest at 12.20, with the finishing order establishing the grid for Sunday's medal showdown. Next up will be the first Touring Car Cup race, which gets underway at 13.15, followed at 14.25 by the opening GT Cup qualifying race.

From this point attention will shift to the Drifting Cup as the category's leading contenders head into battle. Following a final practice session at 15.45 the main event will begin at 17.30, with the Top 16 contest paving the way for the all-important Final. At 20.00, the first FIA Motorsport Games Drifting Cup gold medal winner will be decided.

There will be another set of medals awarded at the same time, with the Digital Cup Final set to kick off at 19.00 and conclude at 20.00. As such, the day will end with two champions confirmed – and the medal table beginning to take shape.

While Saturday is the event's busiest day Sunday has the most at stake, with four categories contesting their deciding races. The Karting Slalom Cup will be up and running from 09.00, with the medal positions set to be decided by 14.30. Meanwhile, at 09.30, the GT Cup contenders will tackle their second one-hour qualifying race, thereby establishing the final grid for the afternoon's deciding battle.

The medal positions in the Formula 4 Cup will be decided by a final race that gets underway at 11.40, with the top-three finishers taking gold, silver and bronze respectively. The Touring Car Cup will conclude next, but with the medal positions decided by the combined results of the category’s two races. The second gets underway at 15.05 and it will not necessarily be the winner that collects the gold medal, with consistency across both contests the key to success.

Finally, the deciding GT Cup contest will get underway at 15.05. This is a winner-takes-all affair, with the top-three finishers collecting the medals and securing FIA Motorsport Games glory for their homeland. Later, all of the successful competitors will be celebrated at the event's closing ceremony, which will also see the National Sporting Authority (ASN) that secures the most medals awarded the inaugural FIA Motorsport Games trophy.

Fans can attend the event free of charge by downloading a voucher from the FIA Motorsport Games website:https://www.fiamotorsportgames.com/tickets.

Each voucher can be redeemded for two tickets when presented at the circuit entrance. For those unable to spectate at the track, all of the action will be streamed live worldwide on the FIA Motorsport Games website, which will also feature live timing and comprehensive news coverage. This will be supplemented by regular social media updates on the event's Facebook, Twitter and Instagram pages.

Full sporting and technical regulations for the FIA Motorsport Games can be found at FIA.com. 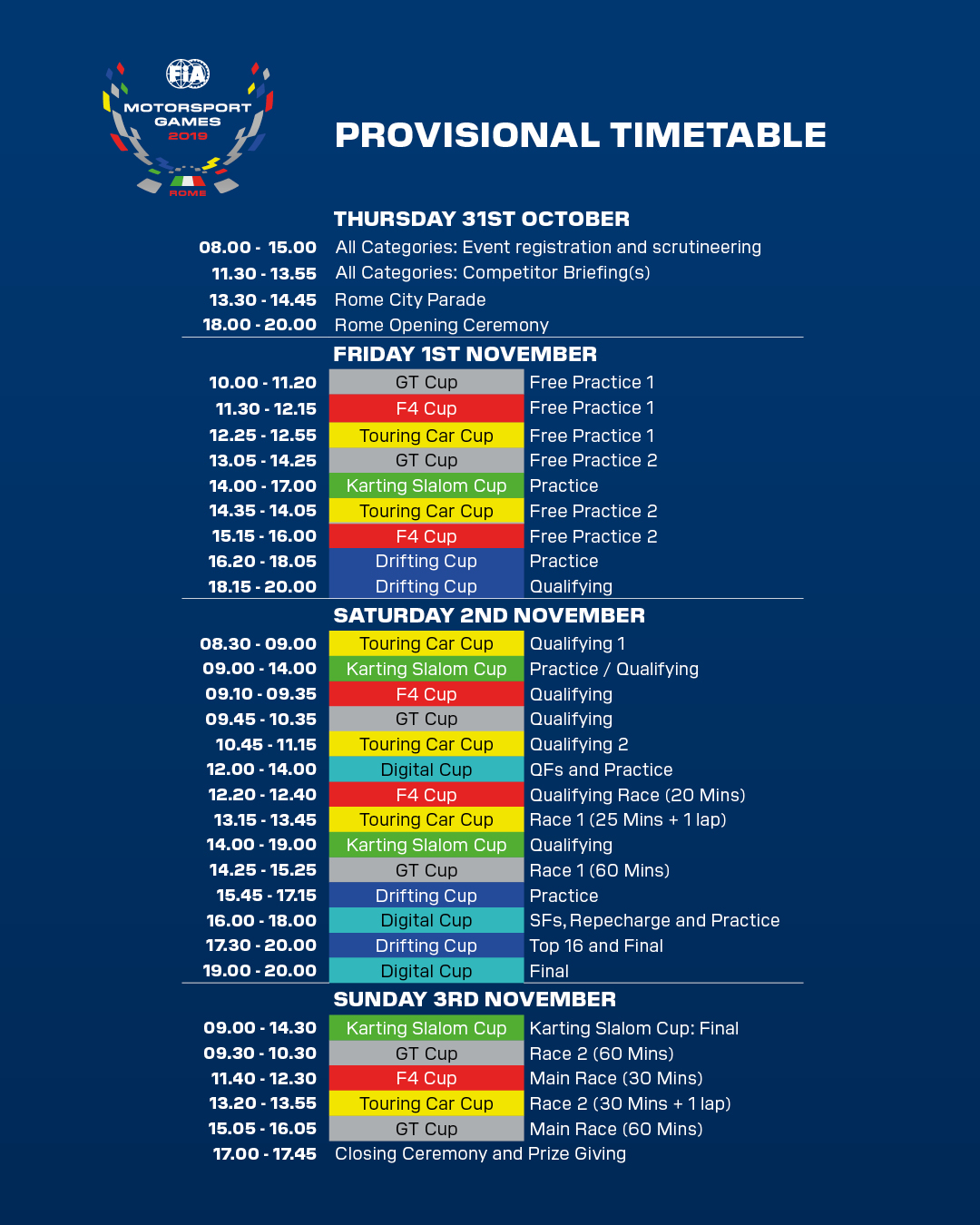