20 rising stars from across the junior single-seater spectrum will contest the Formula 4 Cup when the inaugural FIA Motorsport Games take place in Rome this weekend (November 1-3).

Vallelunga Circuit, located just outside the host city, will stage 20-minute qualifying and 30-minute main races on Saturday and Sunday to determine which National Sporting Authority (ASN) wins gold, silver and bronze in the event’s only single-seater category.

A ground-breaking new Formula 4 car, designed and built exclusively for the FIA by KC Motorgroup Ltd (KCMG), will be used by all 20 drivers. The KCMG 01 is the world’s first hybrid-powered single-seater outside of Formula 1 and also features a Halo safety device, which won’t be mandated for other F4 championships until the next generation of cars arrive in 2021.

Paul Ip, KCMG Founder: “I am honoured and also very proud to see KCMG join the inaugural FIA Motorsport Games as an official partner manufacturer. A capacity grid featuring 20 drivers from around the world represents the ideal showcase for the 01 chassis and its revolutionary hybrid technology, as well as the culmination of much hard work and dedication. Successfully delivering a fleet of new-generation Formula 4 cars for international competition ranks as a major milestone in KCMG’s history.”

Parity is further assured via Formula 4 Cup’s ‘arrive and drive’ format. All cars are operated by leading junior single-seater outfit, Hitech GP, who will share data between drivers and equip them with identical set-ups. This, allied to a limited number of tyres, ensures driving talent contributes most towards success.

AUSTRALIA – LUIS LEEDS: Few drivers on this year’s grid will travel from as far afield as Leeds who won his native F4 title earlier this season. That success came three years after finishing third in British F4, since when he has also appeared in New Zealand’s Toyota Racing Series, Formula Renault Eurocup, and Porsche GT3 Cup Challenge Australia.

BELGIUM – NICOLAS BAERT: Like several drivers on this year’s entry, Baert made his full-season car racing debut in 2019 by tackling the Spanish F4 Championship. He lies eighth with one round still to come.

BRAZIL – JOAO ROSATE: The newly-crowned champion in Brazil’s Sprint Race series – which caters for silhouette touring cars – has very little in the way of single-seater experience. Nevertheless, the confidence of that recent tin-top success and an extensive karting CV should compensate in Vallelunga.

GERMANY – NIKLAS KRUETTEN: The Trier native turned 17 just nine days ago but has already packed plenty into a junior single-seater career that includes 2018’s ADAC F4 rookie title as well as stints in the Italian and UAE equivalents. He now competes in EuroFormula Open, which uses the previous generation of Formula 3 cars, and is a member of the ADAC Sports Foundation.

DENMARK – MALTHE JAKOBSEN: The Dane has split the last two seasons between occasional outings in Southeast Asia’s F4 championship and two full-season assaults on his national series. Sixth in year one was a good start for the karting graduate who won this year’s title at Jyllandsringen earlier in October.

FINLAND – WILLIAM ALATALO: Two seasons spent racing in the Italian Formula 4 Championship means Flying Finn William Alatalo will benefit from plenty of previous experience at Vallelunga. He finished ninth overall this year during a campaign that also featured an outing in the German series.

FRANCE – RESHAD DE GERUS: De Gerus only turned 16 in July but was already halfway through a French F4 campaign where he ultimately finished second overall. That result came 12 months after also claiming the runner-up prize in the same category’s Rookie championship. One to watch in Rome.

ISRAEL – IDO COHEN: Like many young drivers in Europe, Cohen is splitting his campaign between German and Italian Formula 4 series. He finished sixth in the latter thanks, in part, to a podium at Vallelunga on the opening weekend of the season.

ITALY – ANDREA ROSSO: The karting graduate is a two-time Andrea Margutti Trophy winner in his native Italy where he also contested a first season of domestic Formula 4 earlier this year.

JAPAN – KAZUTO KOTAKA: Japanese Formula 3 is considered one of the world’s best junior single-seater categories, so to finish fifth overall despite missing five races suggests Kazuto Kotaka is a driver worth watching at Vallelunga. Third in his native F4 championship two years ago plus several Super GT outings since only add to the 20-year-old’s reputation.

KUWAIT – MOHAMMED AL NUSIF: Brother of Touring Car Cup racer Salem, Mohammed Al Nusif will be making his first-ever competitive appearance in an F4 car when he represents Kuwait in the FIA Motorsport Games at Vallelunga. However, his Radical experience – which mixes high downforce with low weight – means he should be able to hit the ground running.

MALAYSIA – JASPER THONG: Racing runs in the Thong family with older brother Shaun currently competing in Japan’s Super GT championship. Jasper, meanwhile, has spent the last two years at university in the UK. But don’t let that fool you: the 19-year-old’s CV includes 2016’s Asia Formula Renault Class B title and an impressive subsequent campaign in the region’s TCR series.

NEW ZEALAND – FLYNN MULLANY: The FIA Motorsport Games represent a significant step-up for Flynn Mullany whose only experience stems from Formula First, a category without the same level of downforce generated by modern F4 cars. 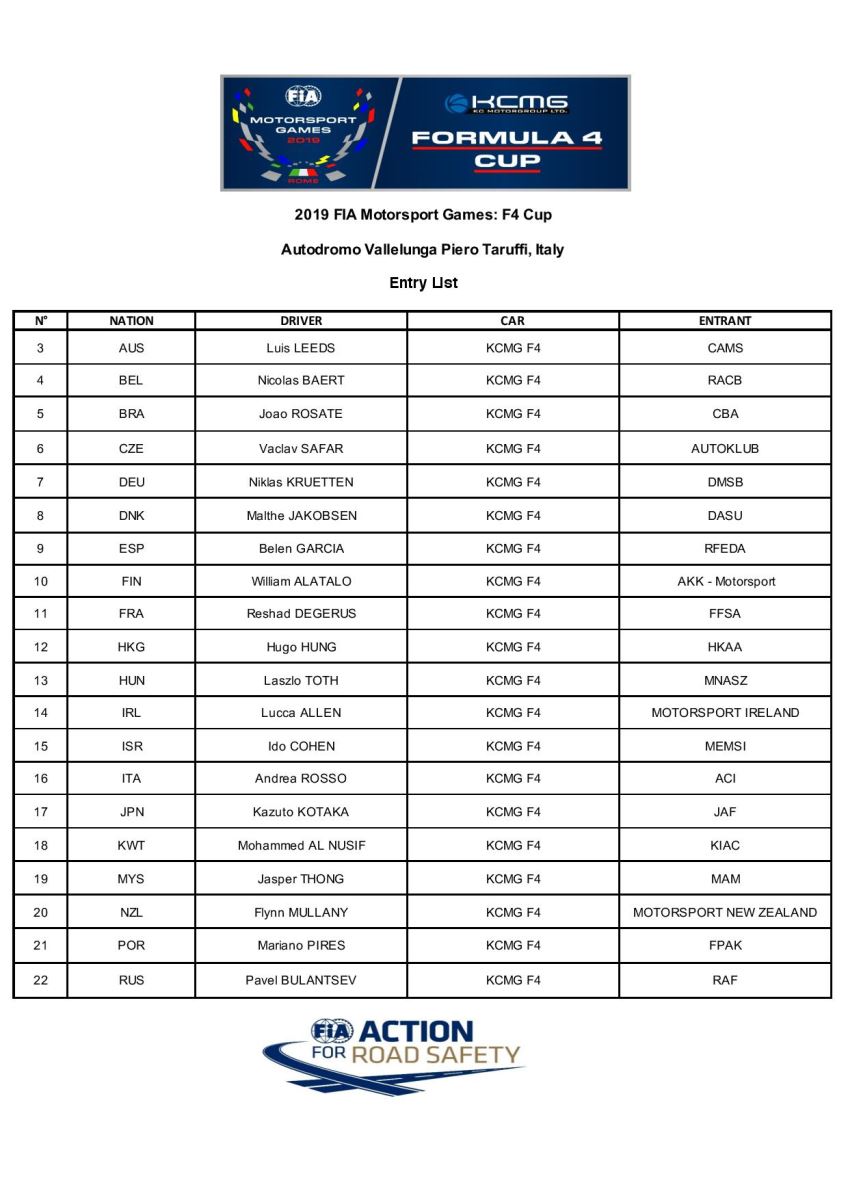