The inaugural FIA Motorsport Games will be broadcast to a global audience following the announcement of an extensive set of television deals for the 1-3 November event.

Each competitor will race in the colours of their national flag at the new multi-disciplinary contest, which sees Rome act as the host city while the nearby Vallelunga Circuit stages on-track activities. Six disciplines will participate, with the GT Cup, Touring Car Cup, Formula 4 Cup, Drifting Cup, Karting Slalom Cup and Digital Cup all forming part of the action.

To reflect the significance and international nature of the event, multiple broadcast agreements have been reached to ensure that the FIA Motorsport Games can be followed across the globe. In Europe, Motorvision TV will air a combination of live coverage and highlights to a wide range of countries, including key markets such as Belgium, France, Portugal and Spain.

A series of region-specific deals will give the event further reach across the continent. In the host nation, Automoto TV will air live coverage while Sky Italia will show highlights. Spanish followers will be able to follow the action live via La Liga OTT, while in the United Kingdom the free-to-air digital sports channel Front Runner will broadcast highlights.

The Netherlands will enjoy live coverage of the Touring Car Cup contest on RTL, allowing fans to follow the progress of its popular representative Tom Coronel. Highlights from the other disciplines will also be aired on the same channel. There will be further live coverage in Lithuania on the 15min network and in Ukraine thanks to Sport, while in Finland viewers will be able to see highlights on MTV Oy.

Russia will be well served thanks to live action on Motorsport TV and highlights packages on Match TV and Auto Plus. This reflects the nation’s commitment to the inaugural FIA Motorsport Games, with its representatives set to challenge for the gold medal in all six disciplines.

There will be significant television coverage beyond Europe, too. In the United States and Canada, fans will be able to watch live action from the FIA Motorsport Games thanks to Motor Trend On Demand. What's more, there will be access to highlights from the event via CBS Sports. Elsewhere in the Americas, viewers in the Caribbean can enjoy highlights on the regional TV network Flow.

Asia will also be served by a range of television agreements. A host of countries – including Thailand, Sri Lanka and the Philippines – will be able to keep track of the action thanks to Motorvision TV's highlights package. Malaysia has confirmed multiple entries for the inaugural FIA Motorsport Games and its fans will have the chance to follow the nation's progress through highlights on the satellite channel Astro.

In Oceania, Australian fans will have access to highlights via Motorsports TV, while their neighbours in New Zealand will be able to follow the event's highlights on TV3. In Israel, which has participants in two disciplines, the Sport 5 channel will broadcast highlights. A host of nations in the Middle East will be served by Motorvision TV, which will show a combination of live coverage to Bahrain, Saudi Arabia and the United Arab Emirates among others.

Kuwait, which is also part of that list, will have its own additional coverage thanks to Al-Rai TV. This coincides with an impressive Kuwaiti effort that will see entrants in all six disciplines at the inaugural FIA Motorsport Games.

A number of region-specific agreements will take highlights to the African continent. In Nigeria, the Talent Sport Channel will air the best of the action, while Kenya’s coverage will come courtesy of Bamba TV. West Africa will be served by XP, with the same network also broadcasting to Tanzania in the east and Zambia in the south of the continent. What's more, Motorvision TV will take a combination of live coverage and highlights to a wide-ranging list of African nations that includes Cameroon, Egypt, Ghana, Morocco and South Africa.

In addition to the extensive TV coverage on offer, fans will have even more opportunities to watch thanks to a variety of online broadcasting options. There will be full access to live coverage from Vallelunga on FIA Motorsport Games and FIA website. What’s more, the action can be followed on the event’s Facebook page, GT World YouTube channel, Motor Trend on Demand and Dailymotion. In Japan, this stream will be made available by J Sports, allowing fans to keep track of their nation's progress in the GT Cup and Formula 4 Cup.

With widespread broadcasting agreements in place and multiple online streaming options to choose from, fans will have every opportunity to follow all of the action from the inaugural FIA Motorsport Games from start to finish. 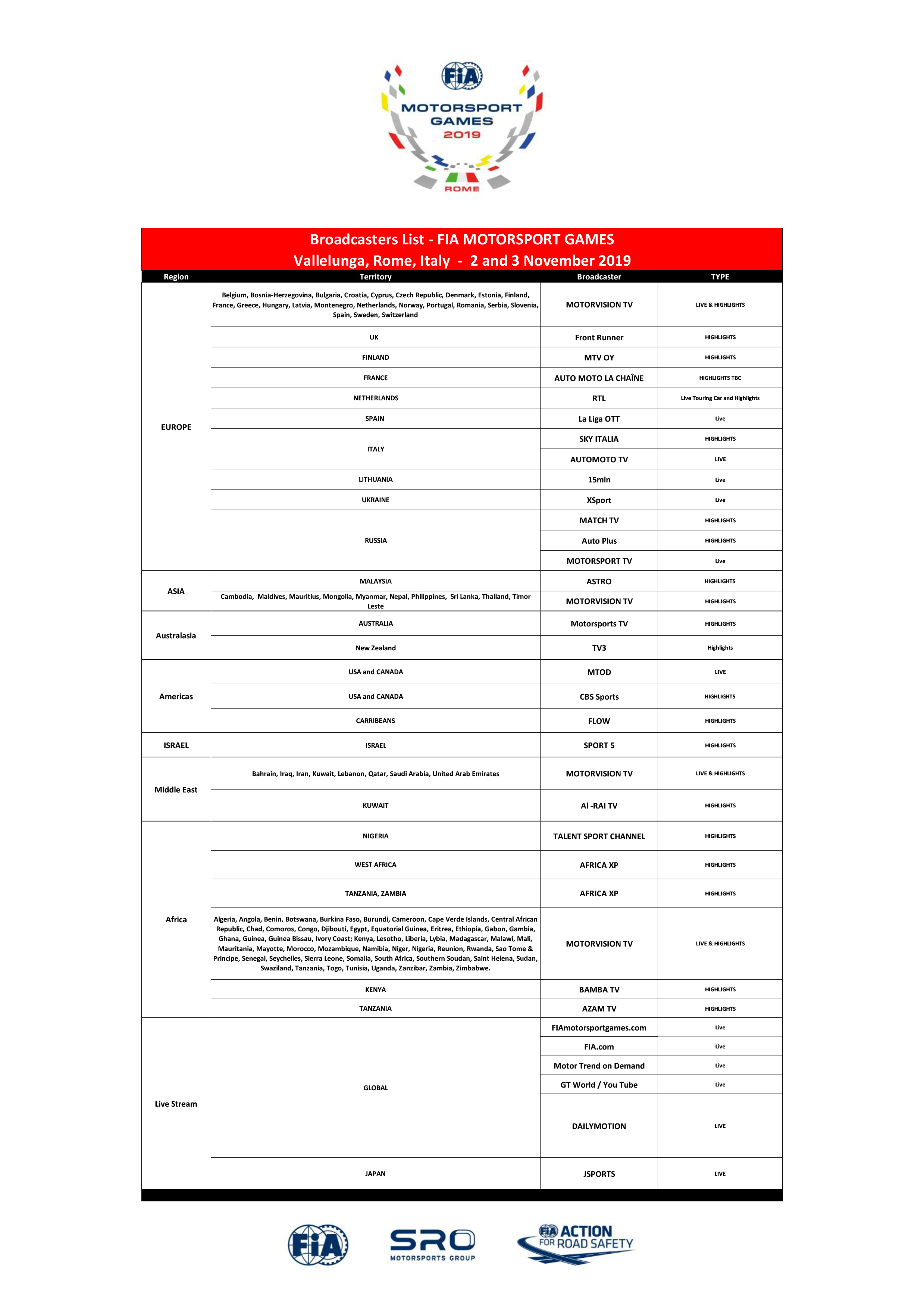