The first medals of the 2022 FIA Motorsport Games were awarded on an action-packed day at Circuit Paul Ricard. Winners were crowned in nine disciplines, with hosts Team France sitting top of the medals table at the close of Saturday’s activities.

There is still plenty to be settled on Sunday, with deciding contests to come in a further seven disciplines. The day will feature track action from GT Sprint, Touring Car and KCMG Formula 4, as well as Karting races for Junior and Senior competitors, Auto Slalom, and Karting Slalom.

Pre-event favourites Germany maintained their fine Auto Slalom form, seeing off Peru in the first knockout run of the day thanks to typically strong performances from Claire Schonborn and Marcel Hellberg. Their winning margin of 1m09.571s was the biggest of the round by a considerable distance.

Hungary beat South Africa by 17.548s, while Latvia ended Ukraine's hopes of an Auto Slalom medal with a gap of 18.159s. Slovakia dispatched Poland by 11.169s, while in the closest contest of the first knockout round Israel edged the United Kingdom by 3.199s In the other match-ups, margins of a little over eight seconds were enough for Croatia, Georgia and the Czech Republic to see off Lithuania, Kosovo and Belgium respectively.

Of the eight nations that sealed safe passage to the quarter-finals, Germany's total time of 4m32.525s was some 18 seconds better than second-best Latvia. The other seven nations were separated by seven seconds, confirming that Team Germany is the clear favourite for gold with little to choose between the other contenders. The quarter and semi-finals will run on Sunday, followed by a bronze medal face-off and the all-important final.

Cross Car medals were awarded for the first time in FIA Motorsport Games history on Saturday. Team Netherlands shared the spoils with Team France after a pair of intense Finals that featured both Junior and Senior competitors.

In the Senior discipline, Team France were the stars of Saturday's action thanks to the in-form David Meat, who won his Semi-Final by a significant margin of almost 15 seconds.   The Frenchman then went on to scoop the home nation’s second gold medal of the event by pipping Team Spain’s Ivan Pina-Chinchilla in the Final. The Spaniard had to recover from a slower start to overtake Sweden’s Patrick Halberg for the silver, while the latter grabbed bronze by, resisting the attentions of Italy, Netherlands and Estonia.

The Junior contest was won by Team Netherlands as Nathan Ottink fended off the chasing pack over the seven-lap dash, securing the nation’s first gold medal of 2022. His winning margin was just 1.5s over Sweden, who earned the silver thanks to Alexander Gustafsson, with bronze heading the way of the recovering Romuald Demelenne for Team Belgium.

Team Latvia overcame stiff competition from Team Kuwait in a phenomenal Drifting Final, with Team Poland rounding out the medals. The initial 30 nations were whittled down to 16, eight and then two Semi-Finals, which pitted Team Latvia against Friday’s top scorers Team Poland, and Team Kuwait against Team Estonia.

Kuwait’s Ali Makhseed faced off against Estonia’s Kevin Pesur and came out on top in a stylish contest between the pair. In the other Semi-Final, Latvia’s Kristaps Blušs performed a giant-killing display to beat Poland’s Jakub Przygoński.

The Polish contingent went on to win the Small Final to seal the bronze medal, while it took a second attempt and a total of four runs to decide an overall winner between the top two nations, who put on an incredible show in front of the fans at Circuit Paul Ricard.

Gold went the way of Team Latvia’s Blušs in his venomous BMW E92 Eurofighter, with Kuwait and Makhseed taking the silver medal with his Nissan S13.5.

Both Baldwin and Harteveld drove the Assetto Corsa Competizione version of the McLaren 720S GT3 machine, while Garcia Gomez was the sole Lamborghini Huracàn GT3 Evo racer in the top 10 after a McLaren-dominated final. The remainder of the top five included Team Australia’s Philippa Boquida in fourth and Team Czech Republic’s Martin Kadlečík in fifth.

The 60-minute run was split into two distinct phases. This was down to driver choice, with most teams electing to run their bronze first while four selected their silver to take the start. France was among the latter group, allowing Simon Gachet to pull out a commanding advantage.

Once the mid-race driver changes were complete the French car led by 30 seconds, but with Fabian Schiller taking over the German entry the gap quickly came down. Schiller pumped in a succession of fastest laps, while Eric Debard did a fine job out front to minimise the time loss.

These two looked set for a final-lap showdown, but a late safety car neutralised the race and sealed the win for France. Team UK took the bronze after an impressive performance from Ian Loggie and Sam Neary, the latter of whom was drafted in late after Chris Froggatt fell ill.

There will be more GT action on Sunday when the GT Sprint category runs at Circuit Paul Ricard, bringing some of the fastest GT3 drivers on the planet to compete for top spot in their national colours.

Andrea Kimi Antonelli took a comfortable win in today's KCMG Formula 4 qualifying race to book pole position for tomorrow's medal-deciding contest. The Team Italy driver was the class of the field in the morning's timed qualifying session and continued to dominate when competitive action began.

His task was made considerably easier by an opening-lap clash between Charlie Wurz (Team Austria) and Valentin Kluss (Team Germany). They started second and third respectively, but contact at turn 1 forced Wurz into retirement and left Kluss to trail home in 20th position.

With his chief rivals enduring a challenging qualifying race, the question now is whether anyone can prevent Andrea Kimi Antonelli from securing the gold for Team Italy. The final run will get underway at 09:25 CET on Sunday morning.

Team Belgium earned the second gold medal of the FIA Motorsport Games with a hard-earned victory in the four-hour Karting Endurance race, which featured as part of the unique global multidisciplinary event for the first time.

The nation’s drivers, Maxime Dron, Jeremy Peclers, Sita Vannmeert, and Antoine Morlet, delivered a stellar performance to climb the order from sixth on the grid to enter the medal-paying positions at the halfway mark.

Team Belgium then pushed on to take the gold medal fight to then leaders, Team Spain, resulting in a yo-yo battle for the top spot before a mistake from the Spaniards finally allowed Belgium to pull out an unassailable advantage.

Alvaro Bajo Robles, Alba Cano Ramirez, Jose Manuel Perez Aicart, and Ivan Velasco can still be proud of bringing home the silver for Spain. The Czech Republic, meanwhile, moved up to third with a pass on Team UK with 27 minutes remaining, ensuring them the first Karting Endurance bronze medal ever awarded.

The number of nations still in the hunt for Karting Slalom gold narrowed to eight on Saturday after the first knockout round saw 16 nations face off at Circuit Paul Ricard. Both drivers from each team ran three laps of the slalom course, with their times – plus any penalties – added together to give a final result.

The Netherlands dispatched Albania, Ukraine overcame Israel, and Georgia edged Canada. The latter was the closest contest of the first knockout phase, with 9.662s the difference between progressing and heading home. The same knockout process will be used on Sunday for the quarter and semi-finals, culminating in the final medal-deciding face-off.

Koenigkan went one better to win round two, seizing the lead from Pinto on the opening lap and staying out front despite stiff opposition from Peru’s Andres Cardenas. The Peruvian came through from fourth on the grid while holding off Team Denmark’s Mikkel Gaarde Pedersen, who bounced back from a non-finish to round out the top three.

In Senior, the same three nations occupied the top spots in both of today’s 16-lap races. Belgium, Sweden and Spain initially made a break from the pursuing pack with pole-sitter Elie Goldstein leading the way in the first Heat. The Belgian then endured unrelenting pressure from Joel Bergström until the Swede slipped up the inside at the hairpin with five laps to go. Goldstein held P2, finishing second 0.5s ahead of Team Spain’s Nacho Tuñon.

Although the second Heat produced a similar result, Bergström had to fight even harder. Goldstein initially took the lead, triggering a bumper-to-bumper battle with Bergström that would also allow Tuñon and Yevan David (Sri Lanka) to make it a four-way fight in the closing stages. Goldstein mounted a near perfect defence, right up until Bergström’s dive for the lead on the penultimate tour. Belgium hung on for second ahead of Spain in third.

The final Qualifying Heats take place tomorrow morning, ahead of the all-important Final to decide the medal winners from 13:05.

Medals were decided in all three Rallying disciplines, with Team Italy earning a pair of golds and the other going to Team France.

The French win never looked in doubt from as early as Friday morning’s opening Special Stage, with the crew of Mathieu Arzeno / Romain Roche (Skoda Fabia) extending their lead to more than a minute over Team Spain’s José Maria López / Borja Rozada (Hyundai i20). The battle for all three medals went down to a trio of Super Special Stages around Circuit Paul Ricard, with Team France again victorious to claim gold ahead of Spain and Estonia's duo of Georg Linnamäe / James Michael Morgan  (Volkswagen Polo).

Pole position in Touring Car went the way of Team Belgium thanks to an in-form Gilles Magnus, who will head Team Netherlands in Sunday’s medal-deciding contest.

The Dutchman’s effort was enough to demote Team Ireland to third spot despite the efforts of Jack Young, who was himself a mere 0.144s away from pole. Sunday begins with the Qualifying Race at 09:40 CET. This set the grid for the all-important main Touring Car race, which will decide the medals over a 30-minute (+1 lap) distance. 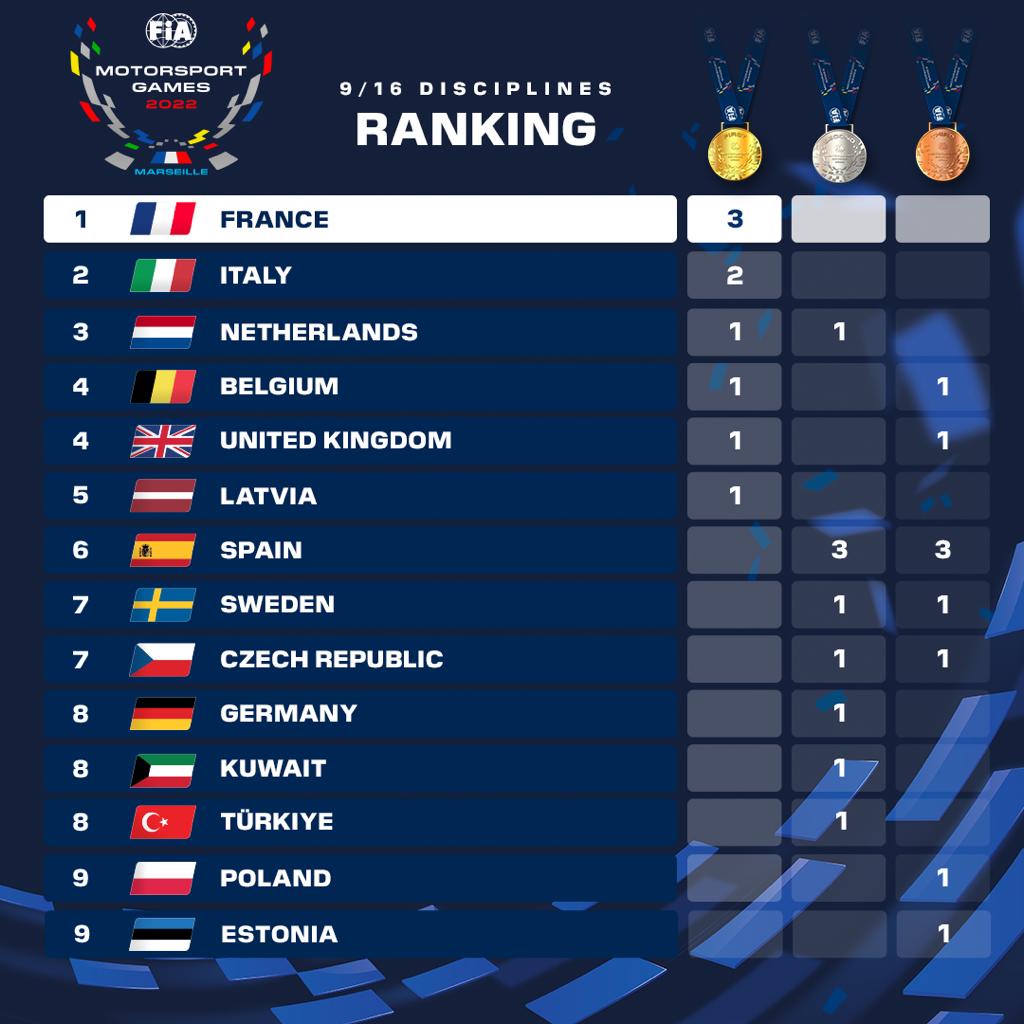