A full field of 24 Drifting Cup entrants has been revealed ahead of next month's FIA Motorsport Games (1-3 November).

Each competitor will represent their home nation at the multidisciplinary event's inaugural running, which will see Rome act as the host city while the nearby Vallelunga Circuit stages on-track activities. The contest will take place under floodlights on Friday and Saturday evenings, utilising part of Vallelunga’s main straight and the complex between turns 10 and 14.

One of six distinctive disciplines that will make up the FIA Motorsport Games, the Drifting Cup has attracted an impressive field of internationally recognised competitors. These are the medal hopefuls with their sights set on gold:

AUSTRIA: Austria will call upon Daniel Brandner as it goes in search of Drifting Cup glory. Nicknamed "Brandy", the 28-year-old currently competes in the Drift Masters European Championship and delivered a season-best showing during the recent trip to Latvia. Brandner will take the wheel of an Austrian-liveried BMW E46 when he hits the track at Vallelunga.

BELARUS: Belarus will call upon Dmitry Nahula as its Drifting Cup representative at the FIA Motorsport Games. The experienced campaigner is a past domestic champion and recently finished fourth in the hotly contested Eastern European Drifting Cup. Part of an impressive Belarusian contingent for the FIA Motorsport Games, Nagula will tackle the event in a Nissan 200SX.

CZECH REPUBLIC: The Czech Republic's Drifting Cup effort will be led by Michal Reichert. The 31-year-old is known domestically for competing in the Czech Drift Series, while his international exploits have included promising results in the Drift Masters European Championship. The Czech contender will handle a BMW M3 E92 at the 1-3 November event.

DENMARK: Dennis Hansen will travel to Rome with Team Denmark's hopes of Drifting Cup gold on his shoulders. A former motocross rider, Hansen has experience of the Drift Masters European Championship and the domestic Nordic Drift Series. He will drive a Nissan Silvia S15 fitted with a Toyota Supra engine at this year's FIA Motorsport Games.

ESTONIA: Though a relatively small nation, Estonia has produced an impressive amount of motorsport talent in recent years. The drift discipline has been no exception and the country will have high hopes for Ao Vaida at this year's FIA Motorsport Games. The Estonian will drive the popular BMW E36 model when he represents his homeland at Vallelunga.

FINLAND: Finland enjoys an illustrious motorsport heritage, highlighted by several legendary rally drivers and circuit racers. With drifting combining aspects of these two very different disciplines the nation should be a serious medal contender, with Juha Pöytälaakso driving Team Finland's BMW M3 E92. Like several of his FIA Motorsport Games rivals, the 30-year-old also competes in the Drift Masters European Championship. He’s also the winner of the 2019 Iron Drift King held at Ferropolis, known as the “city of iron”.

FRANCE: Team France has put its faith in Benjamin Boulbès for the trip to Rome. The Toulouse-based ace is the clear reference in French drift competition, having claimed five domestic titles over the course of his career. Boulbès has also extended his interests beyond his homeland to compete in events across Europe, including the Drift Masters European Championship. He will drive a BMW M3 E93 as he goes for gold at Vallelunga.

GEORGIA: Team Georgia's BMW E36 will be driven by Mevlud Meladze, who comes to the FIA Motorsport Games with a unique background. Meladze first found fame as a champion fighter competing in the Soviet martial art Sambo, winning gold at the 1991 European Cup. He has since switched his attention to the circuit, first as a racer and more recently in drift competitions. He is also a road safety campaigner and among the leading figures in Georgian motorsport.

GREECE: Aged just 17, Team Greece driver Stavros Grillis will be the youngest contender in the Drifting Cup category at this year's FIA Motorsport Games. The teenager has been honing his skills since the age of 11 and comes with extensive experience in his homeland and the wider Mediterranean region. This year Grillis stepped up to the Drift Kings International Europe Series and finished an impressive sixth in the standings. His machine of choice is a Toyota AE 86.

HUNGARY: Team Hungary revealed its full FIA Motorsport Games line-up at a press conference earlier this week, naming Zoltán Szántó as its representative for the Drifting Cup. Szántó has established his reputation by competing across Europe, including outings in the Czech and Adria Drift Series. He will be one of four hopefuls at the wheel of a BMW M3 E92, the most popular model among this year's Drifting Cup contenders.

ITALY: Team Italy will field a Toyota GT 86 as Federico Sceriffo tackles the Drifting Cup on home soil. A native of Milan, Sceriffo has more than 15 years' experience in the discipline. Among his career highlights, the Italian has earned success in D1GP, the International Drifting Champions Cup and the Red Bull Drifting Battle.

KUWAIT: A back-to-back winner of Kuwait's King of Drift title in 2017-2018, Ali Makhseed is an ideal candidate to represent his nation at the FIA Motorsport Games. Driving a Nissan 240SX, Makhseed is the only Drifting Cup contender from the Middle-East, a region in which the discipline enjoys significant popularity.

LATVIA: Team Latvia will entrust its hopes at the FIA Motorsport Games to Edmunds Berzins, who will drive a BMW E46 prepared by UE Motosports. Berzins will draw upon his recent experience finishing fourth in the NEZ Pro Drift Championship, as well as a domestic career that includes winning the 2019 Latvian Drifting Championship.

LITHUANIA: Lithuania's representative will be Benediktas Čirba, who will drive BMW's popular E46 model. Like many of his rivals Čirba comes with experience in the Drift Masters European Championship. He finished a strong eighth overall in this year's standings and also clinched the 2019 Lithuanian Championship.

MALTA: The Maltese effort will be spearheaded by Kane Pisani. A contender in Drift Open, his car of choice is a Toyota Supra. Pisani will represent the smallest nation competing for Drifting Cup gold at this year's FIA Motorsport Games, with Malta's population estimated to be around 493,500.

NETHERLANDS: The Netherlands will have serious medal aspirations as they call upon the recently crowned Drift Kings International Europe Series champion Rick Van Goethem. Having already taken on and beaten many of his Drifting Cup opponents in 2019, Van Goethem will be among the favourites at the wheel of his Nissan Skyline R33.

NORWAY: The Norwegian flag will be flown by Odd-Helge Helstad, who will pilot Nissan's 200SX model at the FIA Motorsport Games. The 23-year-old has already enjoyed notable success in the discipline: he became Norwegian junior champion in 2014, and in 2016 won the Norwegian Powerdrift series before adding the senior Norwegian title in 2017.

PORTUGAL: Team Portugal has announced that it will field Diogo Manuel Dias Correia at the FIA Motorsport Games. The 23-year-old is the current Portuguese Drift Championship title holder and leads the standings once again this season. Like several of his rivals, he will pilot a BMW M3 E92 as he looks to add the Drifting Cup gold medal to his resume.

ROMANIA: Team Romania will call upon Vlad Andrei Stanescu, who will chase the Drifting Cup gold medal at the wheel of a BMW M1. Competing in the familiar colours of his nation's flag, Stanescu comes with valuable experience in the leading Drift Masters European Championship

RUSSIA: Russia is one of the leading forces in drifting, with several of its top performers ranking among the best in the business. The nation's representative at the FIA Motorsport Games will be Ilia Fedorov, one of the foremost drivers in the Russian Drift Series and a top-10 finisher at last year's FIA Intercontinental Drifting Cup. The 33-year-old will tackle the event aboard a Nissan Silvia S14.

SLOVAKIA: Team Slovakia has put its faith in János Onódi, who will drive a BMW E36 as he chases Drifting Cup glory. Nicknamed "Dianos", the 29-year-old is a regular competitor in the Czech Drift Series. Indeed, there will be plenty of competition with the neighbouring Czech Republic as both nations contend for the medal positions at Vallelunga.

SWEDEN: Sweden's hopes of Drifting Cup gold rest with Christian Erlandsson. A regular contender in the Drift Masters European Championship, he will tackle the FIA Motorsport Games in a Subaru BRZ. With confirmation of Sweden's entry alongside Denmark and Norway, there is impressive participation among the Scandinavian nations.

SWITZERLAND: Team Switzerland will be represented by one of Europe's brightest talents, Yves Meyer, who last year finished as runner-up in the prestigious FIA Intercontinental Drifting Cup. The 28-year-old is also a leading contender in the Drift Kings International Europe Series and Oman International Drift Series. Meyer will go for gold at the wheel of a Swiss-liveried BMW M2.

UKRAINE: Ukraine will call upon one of Europe's leading drift competitors, Dmitriy Illyuk, who will take the wheel of a Nissan 200SX. With a diverse competitive background that includes drag racing and rallying, Illyuk currently contests the Drift Kings International Series. He took victory earlier this year in Hungary on route to tenth in the end-of-season standings.

The Drifting Cup is the second of six FIA Motorsport Games categories to reveal its full entry list following yesterday's announcement of the GT Cup hopefuls. The contenders in four more disciplines will be confirmed over the coming days, with the Touring Car Cup, Formula 4 Cup, Karting Slalom Cup and Digital Cup entry lists all set to be confirmed. Full sporting and technical regulations for each category can be found at FIA.com. 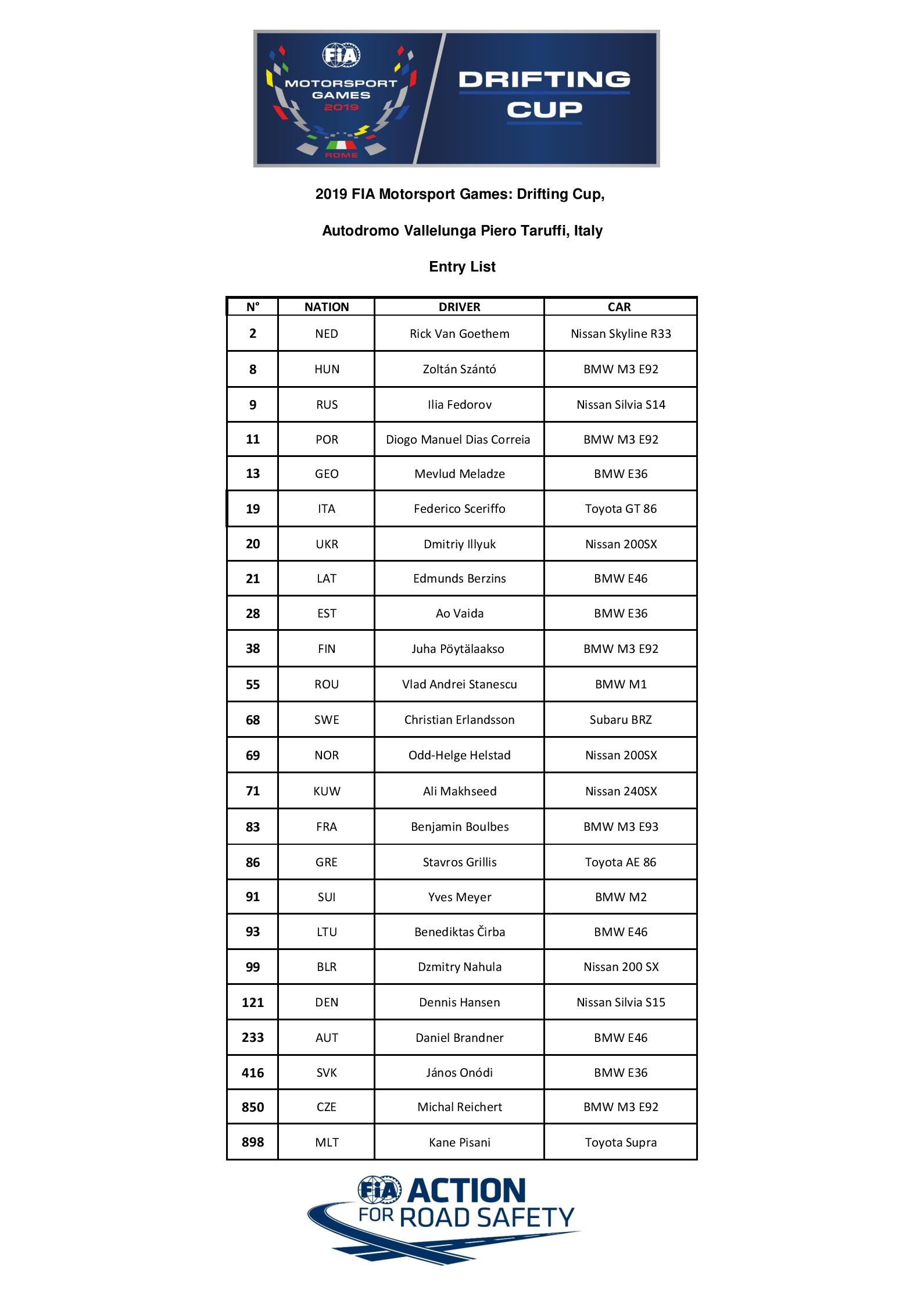