The final entry list for the GT Cup category has been confirmed ahead of next month's inaugural FIA Motorsport Games, with 22 National Sporting Federations from across the globe set to tackle the much-anticipated 1-3 November event.

A diverse and highly skilled set of international racers will travel to Vallelunga Circuit near Rome where they will contest two qualifying races and a deciding main event, the winner of which will take home the coveted gold medal.

This year’s GT Cup grid brings together competitors from Europe, Asia, North America and Oceania, all of whom will race for national pride in the colours of their country’s flag.  Seven leading automotive brands will be on-track at Vallelunga, with entrants putting their faith in Aston Martin, Audi, Ferrari, Honda, Lamborghini, Mercedes-AMG and Porsche machinery.

With a little over three weeks remaining before opening practice gets underway, these are the contenders who will hope to leave Rome with GT Cup gold:

AUSTRALIA: Team Australia's effort will be a family affair, with father-son duo Stephen and Brenton Grove driving a Porsche 911 GT3 R. Both men are well acquainted with the German marque's competitive machinery, while technical backup will come from brand expert Herberth Motorsport.

BELARUS: Like the Australian effort, Team Belarus has also put its trust in a father-son pairing. Experienced international competitors Alexander Talkanitsa Sr. and Alexander Talkanitsa Jr. will share a Ferrari 488 GT3 at Vallelunga, with behind-the-scenes backup coming from their own AT Racing Team.

BELGIUM: The Belgian effort will see title-winning bronze-graded driver Louis Machiels paired with Nico Verdonck, who has achieved success in single-seaters, touring cars and GT machinery over the past decade. They will drive an Audi R8 LMS GT3 run by Attempto Racing.

CHINA: Yaqi Zhang and Xiaole He will fly the Chinese flag at this year's FIA Motorsport Games. Each man brings experience of domestic and international series at the wheel of both touring car and GT equipment. At Vallelunga, they will use a Mercedes-AMG GT3 prepared by accomplished Chinese outfit Phantom Pro Racing Team.

CHINESE TAIPEI: Team Chinese Taipei will tackle the FIA Motorsport Games with a Lamborghini Huracan GT3 run by Gama Racing. On the driver front, the experienced Hanss Po Heng Lin will be joined by Evan Chen, who is currently contesting has second season of Lamborghini Super Trofeo Asia with the Gama squad.

FRANCE: Team France will field the established duo of Jean-Luc Beaubelique and Jim Pla, who have shared cars in a variety of GT3 and GT4 competitions and competed together at last year's FIA GT Nations Cup, the forerunner of the FIA Motorsport Games. As was the case on that occasion, they will drive a Mercedes-AMG GT3 prepared by the renowned AKKA ASP squad.

GERMANY: Putting their faith in a Porsche 911 GT3 R, Team Germany will be led by Edward-Lewis Brauner and Alfred Renauer, both of whom are experts at the wheel of the Stuttgart brand's machinery. The same can be said of the Herberth Motorsport outfit, which will handle behind-the-scenes duties for the German effort.

HONG KONG: Hong Kong's Paul Ip will undertake a dual role at the FIA Motorsport Games. Not only has his KCMG operation built the fleet of cutting-edge F4 Cup cars, he will get behind the wheel himself for the GT Cup contest. Ip's teammate will be the experienced Marchy Lee, with the duo set to drive a Honda NSX GT3 run by Reno Racing.

ITALY: Team Italy is the third nation to put its FIA Motorsport Games GT Cup hopes in the hands of a father-son duo, with experienced international competitors Gianluca and Giorgio Roda confirmed for the event. They will drive a Ferrari 488 GT3 prepared by brand specialist AF Corse as they look to capture the gold medal on home turf.

JAPAN: Japan has made its ambitions clear by combining Hiroshi Hamaguchi, one of the world's leading bronze-graded drivers, with young charger Ukyo Sasahara. They will pilot a Lamborghini Huracan GT3 run by Orange1 FFF Racing Team, which recently became the first squad to capture three overall Blancpain GT Series drivers' titles in a single season.

POLAND: Poland's hopes will rest upon Andrzej Lewandowski and Artur Janosz, who will tackle the FIA Motorsport Games using a Lamborghini Huracan GT3 prepared by Vincenzo Sospiri Racing. Both Polish drivers have winning pedigree at the wheel of Lamborghini machinery and will hope to translate that know-how into medal success at Vallelunga.

PORTUGAL: Team Portugal should be a serious contender at Vallelunga, with Miguel Ramos joining Henrique Chaves in an Audi R8 LMS GT3. Ramos is a vastly experienced and highly successful bronze-graded driver, while his young teammate enjoys a growing reputation in the sport. Attempto Racing will oversee the Portuguese effort.

RUSSIA: Rinat Salikhov and Denis Bulatov will represent Russia at the wheel of a Ferrari 488 GT3 run by Rinaldi Racing. There is no shortage of familiarity here, as this line-up has spent the 2019 season competing in the Blancpain GT Series Endurance Cup. Having also finished fourth at last year's FIA GT Nations Cup with the same crew, Team Russia will be targeting the medal positions at Vallelunga.

SPAIN: Álvaro Lobera and Fernando Navarrete will drive Lamborghini's successful Huracan GT3 model at the FIA Motorsport Games. The pair know each other well from several past endurance outings and currently compete as teammates in Spain’s domestic touring car championship. Their effort will be overseen by Racing Team Spain.

SWITZERLAND: Team Switzerland will also use a Lamborghini Huracan GT3 at the FIA Motorsport Games, allowing Christoph Lenz to draw upon his extensive experience of the car. He will be joined by recently crowned ADAC GT Masters champion Patric Niederhause, while Raton Racing will provide technical support for the Swiss entry.

THAILAND: Team Thailand's line-up will be led by the pairing of Vutthikorn Inthraphuvasak and Kantadhee Kusiri, who will drive a Porsche 911 GT3-R prepared by leading Italian squad Dinamic Motorsport. Both drivers have extensive experience on the Asian continent, while Kusiri has recently tackled the ultra-competitive Porsche Supercup.

TURKEY: As winners of the FIA GT Nations Cup, Team Turkey's unchanged driver line-up of Salih Yoluç and Ayhancan Güven must be considered strong medal contenders for the FIA Motorsport Games. They will pilot an Aston Martin Vantage GT3 fielded by TF Sport, which has this year claimed multiple titles in British GT and the Blancpain GT Series.

UNITED KINGDOM: The United Kingdom's driver line-up will feature Flick Haigh and Chris Froggatt at the wheel of a Ferrari 488 GT3 run by AF Corse. As the first woman to clinch the prestigious British GT title, Haigh is no stranger to on-track success. Froggatt meanwhile is an expert in Ferrari machinery and contested last year's FIA GT Nations Cup using the same car.

USA: Like their counterparts from the United Kingdom, the United States will also use an AF Corse-run Ferrari 488 GT3. Spencer Pumpelly and Robert Ferriol will handle driving duties at Vallelunga Circuit. Despite being the only all-bronze driver pairing in the field, both bring significant experience of the ultra-competitive IMSA SportsCar Championship. 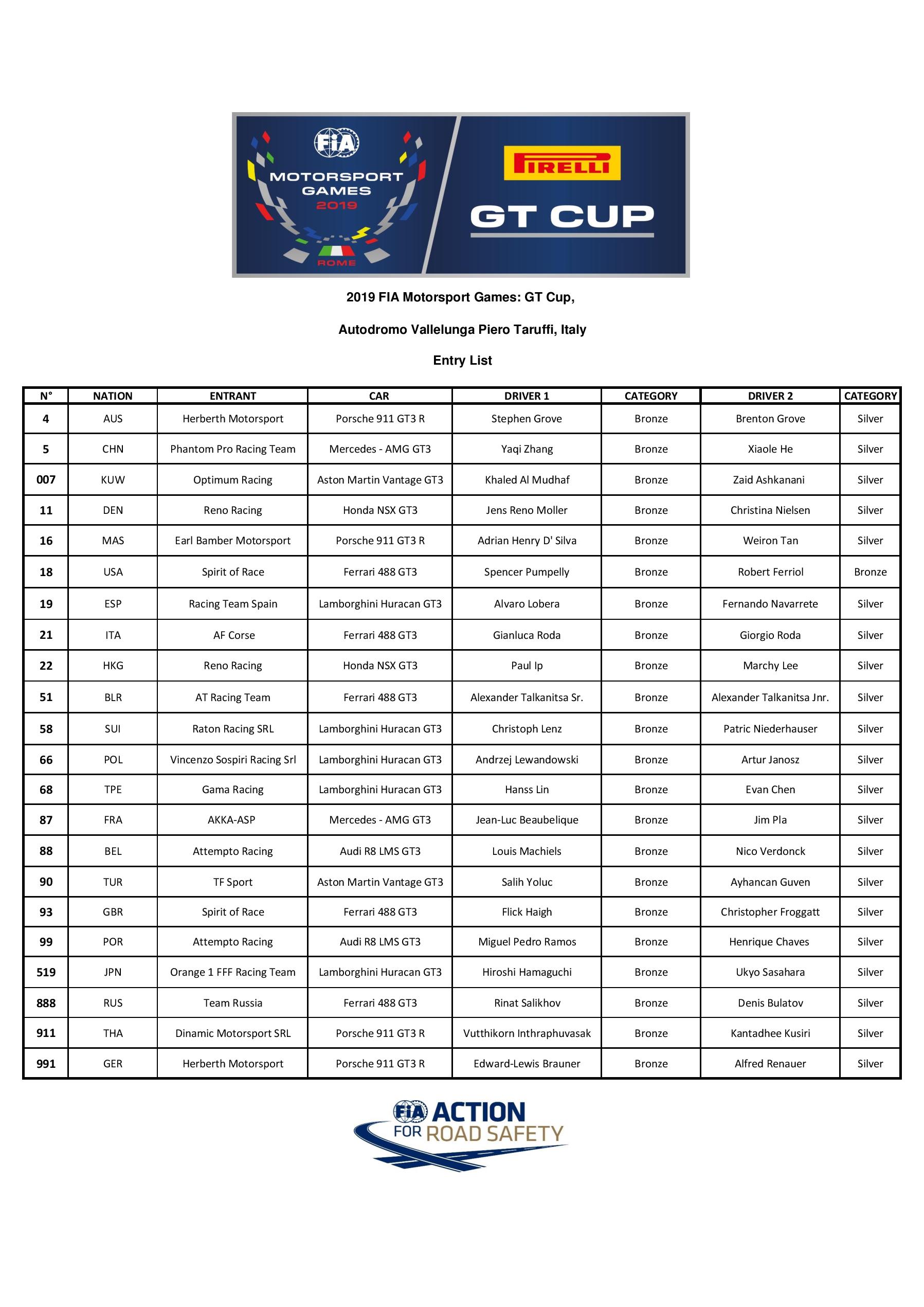