20 drivers will battle for Touring Car Cup gold on November 1-3 when the inaugural FIA Motorsport Games take place at the Vallelunga Circuit near the host city of Rome.

Star names from TCR’s regional championships plus eight manufacturers will be represented in Italy where two races – one on Saturday, the other on Sunday – decide this year’s medallists. These, plus the results from five other categories, will determine which National Sporting Authority (ASN) wins the 2019 FIA Motorsport Games trophy.

Europe, Asia, Oceania, North America and the Middle East are all represented amongst 20 drivers aiming for the ‘tin-top’ rostrum in just under three weeks.

UNITED KINGDOM – RORY BUTCHER: Fresh from a fifth-place finish in the highly-competitive British Touring Car Championship, Butcher will swap his NGTC-spec Honda for the brand-new MG6 XPower TCR in time for November’s FIA Motorsport Games. But while the cars are very different, the team running them is not. Indeed, Butcher has raced with the same AmD Tuning squad for the past two years.

GERMANY – LUCA ENGSTLER: TCR Asia Series’ 2018 and ’19 champion found things a little tougher this year in Europe where he ultimately took ninth in the overall standings. Still, the 19-year-old is bound to be a contender in Italy where he will compete with the same Hyundai i30 N TCR with which he also claimed last season’s Middle East title.

NORWAY – KRISTIAN MOE SÆTHEREN: The Alfa Romeo is bound to be popular on home turf in Italy where TCR Scandinavia regular Kristian Moe Sætheren is scheduled to drive a Giulietta Veloce.

RUSSIA – KLIM GAVRILOV: The 19-year-old finished third in his native TCR championship this year, while his CV also includes outings in TCR’s European and Italian series. Victories in the latter and Russia all came at the wheel of an Audi RS3 LMS, which he will again use at Vallelunga.

HUNGARY – NORBERT KISS: One of Hungary’s most famous racing drivers – albeit a two-time FIA European Truck Racing champion – is heading back to his touring car roots this November. Norbert Kiss is now best known as a top tier truck racer but initially turned heads by winning four national touring car crowns in as many years between 2006 and ’09. He now returns with Alfa Romeo eager to claim another title.

BELGIUM – GILLES MAGNUS: RACB Academy member Gilles Magnus was a race winner en route to sixth in this term's TCR Europe standings. He will benefit from familiarity at Vallelunga where the 20-year-old links up with his regular 2019 team (Comtoyou Racing) and car (Audi RS3 LMS).

CHINA – ZHEN DONG ZHANG: 2015’s China Touring Car champion handed the new MG6 its global debut, as well as a TCR China podium, at Zhejiang in July. The same driver, car and team combination will also be responsible for the 6’s international bow next month when a similar result would guarantee China a Motorsport Games Touring Car Cup medal.

USA – MASON FILIPPI: Filippi knows his way around a TCR car having campaigned both VW and Hyundai machinery in America for the last two years. A strong conclusion to the 2019 season saw the California-based racer clinch runner-up in the TCR class of the Michelin Pilot Challenge.

LATVIA – VALTERS ZVIEDRIS: Five-time Latvian karting champion Valters Zviedris is one of the least experienced TCR drivers on this year’s grid having made just one endurance appearance in the class earlier this year.

SWEDEN – JESSICA BÄCKMAN: The proven touring car all-rounder has recorded podium finishes in the European, Scandinavian, German and British TCR championships since graduating from karting two years ago. Now she heads to the FIA Motorsport Games with the same Target Competition-run Hyundai as she’s used throughout this year’s European campaign.

NETHERLANDS – TOM CORONEL: There are few drivers more recognisable in tin-top circles than Tom Coronel who has contested every FIA World Touring Car Championship campaign since 2005. While the category adopted TCR regulations two years ago, Coronel – a former Japanese Formula 3 champion – has also made several TCR Europe appearances this year with the same Boutsen Ginion Honda he’ll race at Vallelunga.

KUWAIT – SALEM AL NUSIF: The only Middle Eastern nation in this year’s entry is represented by one of the region’s most successful Radical drivers, Salem Al Nusif, who appears in one of Comtoyou Racing’s three Audis.

CZECH REPUBLIC – DUŠAN KOUŘIL: Still just 17, Kouřil has already made a name for himself in TCR’s Eastern European series where the Czech finished third overall this year driving the same Hyundai i30 N with which he’ll now appear in Italy.

ITALY – ENRICO BETTERA: Home advantage could prove vital for Enrico Bettera who powered his Audi to third place during TCR Italy’s recent Vallelunga visit. He and Pit Lane Competition occupy fourth in the overall standings with one round remaining.

SLOVAKIA – MATEJ HOMOLA: Slovakia is represented by one of its best-known drivers, Matej Homola, who began racing touring cars internationally in 2012. His CV includes the S2000 and TC1 machinery previously used by the FIA World Touring Car Championship, as well as several TCR models. And it’s with the Hyundai i30 N, which Homola now races in Europe, that he will be representing Slovakia at the FIA Motorsport Games.

HONG KONG – KA TO JIM: Single-seaters, sports-prototypes, touring cars: you name it, Jim’s driven it! However, his latest outings in Japan’s Super Taikyu championship and Dubai 24 Hours endurance race have all been with a Honda Civic TCR, which he’ll use once again at Vallelunga.

Competitors from across the globe will chase a spot on the podium, with gold, silver and bronze medals awarded to the top-three finishers in each event. These results will produce an overall medal table, with the top National Sporting Authority (ASN) awarded the inaugural FIA Motorsport Games trophy during the closing ceremony. 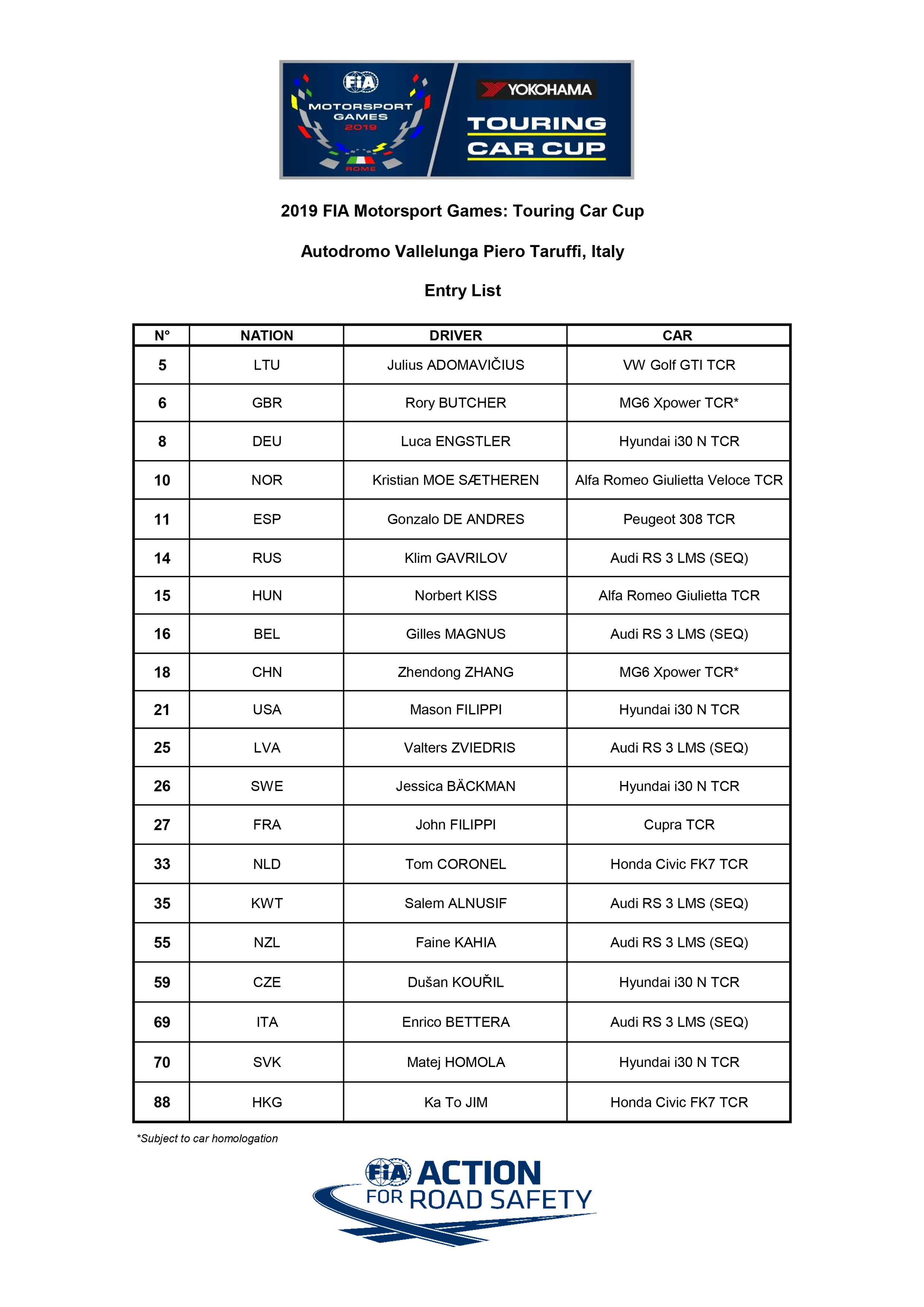