30 competitors from across the globe will compete for gold during this year’s FIA Motorsport Games Digital Cup, which will be held in Rome and at the nearby Vallelunga Circuit from 1-3 November.

In addition to the 22 National Sporting Authorities that formed the initial influx of entries, a further eight digital racers have committed to the inaugural edition of the multidisciplinary motorsport event.

Australia will be represented by Gran Turismo World Tour regular Cody Nikola Latkovski. The 19-year-old enjoyed much success in this year’s edition of the tournament, scoring back-to-back victories in the Manufacturer Series in New York City and Salzburg, and was also a podium-finisher in the Nations Cup.

Kirill Piletsky from Belarus got into virtual racing playing Colin McRae Rally 2.0 in the early 2000s, finishing second in his domestic championship. His career highlights include taking part in the Nissan GT Academy event at Silverstone.

18-year-old Chou Yi-Teng from Chinese Taipei started playing racing games at the age of five and enjoyed much success on his domestic sim racing scene. This year he has undertaken his first season of FIA-sanctioned digital motor sport and is currently ranked 12th in the Asian region. He will also participate in the GT Sport World Final at the end of November this year.

Bernal Valverde was part of the team that won in the Manufacturer Series during this year’s GT World Tour New York City event. The Costa Rican, who is also a successful kart racer, should be a force to be reckoned with at the FIA Motorsport Games.

The Czech Republic will field a competitor with an unusual background in the shape of accomplished rally driver Filip Mareš. Driving a Skoda Fabia R5, the 27-year-old is a front-runner in the FIA European Rally Championship where he currently sits fourth in the standings, with second spot at his home round of the series being his best result.

Denmark’s entrant Ian Andersen has been active in both the Nations Cup and the Manufacturer Series this season. A deaf athlete who started out in karts before later swapping them for virtual race tracks, his exploits will be closely followed by the Danish Deaf Sports Federation.

Frenchman Kevin Leaune is an experienced digital motor sport campaigner and multiple tournament winner in Project CARS. He also came third in the 2018 eROC (part of the annual Race of Champions, including both simulator and real-life competition) held in Riyadh and has real-life experience of karting and testing multiple race cars.

Georgian digital racer Archil Tsimakuridze has been involved with the sport for over four years, scoring numerous wins in several competitions. His categories of choice are GT3 on Project Cars 2 and Gr.3 in Gran Turismo.

Germany will field Mikail Hizal, the Nations Cup winner at the recent GT World Tour event at Hangar-7 in Salzburg. His biggest successes to date include a victory in last year’s European Finals in Madrid followed by a second-place finish in the World Finals in Monaco the same year.

Hong Kongese digital racer Law Yat Lam will be another participant from the GT World Tour scene. His best results to date include seventh overall in 2018 Nations Cup Asia-Oceania Final held in Tokyo and a sixth-place in the Nations Cup in Salzburg the same year.

Benjámin Báder from Hungary is another racer who’s no stranger to GT Sport, having won GT World Tour events in the past.

Ireland will be represented by 36-year-old Keith Dempsey. He will rely on his real-life racing experience, having competed in Formula Ford and Formula Renault in the early 2000s. He has also been involved in sim racing since the days of Grand Prix 2, starting out with single-player mode on a keyboard.

22-year-old Stefano Conte will represent the host nation of the FIA Motorsport Games. The Italian is a versatile digital racer, a winner of his domestic championship, and will be aiming to clinch a medal on home soil at Vallelunga.

19-year-old Rashed Alrashdan has never participated in any official digital motor sport championship but made an excellent impression in a selection tournament organised by KIAC. As such, he will represent Kuwait at the event.

Latvian candidate, 20-year-old Kriss Jaunzemis, has proven his abilities by winning the local EGP E-Autosport Grand Prix. At the FIA Motorsport Games, he’ll be looking to learn from the best in the business and hopefully challenge them.

Martynas Sidunovas is a multiple digital motor sport title-winner in Lithuania, conquering competitions held on different platforms. He’s also the winner of the 2017 Dream 2 Drive, a programme that takes drivers from the world of simulation to real-life racing. He’s been an active competitor ever since behind the wheel of a Volkswagen Scirocco.

The father of Australia’s Cody Nikola Latkovski, Valentin, will also take part in the FIA Motorsport Games, representing his homeland North Macedonia and creating a unique story. The 55-year-old Doctor of Veterinary Medicine has been promoting and organising digital motor sport tournaments both in Macedonia and Australia and has a wealth of experience to lean on.

Malaysian Mior Hafiz is a relative newcomer to digital motor sport, having only competed for three years. Things got more serious when his dad built a sim racing rig for him and he is currently the highest ranked Malaysian in GT Sport. Earlier this year he won the inaugural Malaysian leg of the eRacing Grand Prix SEA.

Mexico will field 28-year-old Daniel Gutierrez, who started competing online at the age of eight and is an experienced and decorated GT Sport racer.

Norway’s Tommy Østgaard started in racing at an early age with radio-controlled cars. He then tried to forge a career in motor racing by competing with such cars as Formula BMW, Formula Renault and Renault Clio Cup. A second-place finish in the 2017 iRacing Road Pro Series is among his career highlights. He’s also a Porsche Esports Supercup competitor.

Representing Poland, Marcin Świderek may be one of the least experienced Digital Cup participants, having started playing Gran Turismo only in April of 2018. Nevertheless, his rapid rise through the ranks on his local sim racing scene is proof that he can be one of the dark horses of the tournament.

Vasily Anufriev is Russia’s choice for the digital competition. An economist by training, he did some amateur-level karting before committing to online racing more than 10 years. In his homeland he’s known for his YouTube channel where he posts tutorial videos helping people to improve their digital racing skills.

Singapore will rely on Charles Theseira, whose digital racing journey began two decades ago with Formula One 99 on the original PlayStation. He later moved to more serious platforms on the PC, such as rFactor and iRacing, and in 2016 won the Esso Synergy Race Off. What's more, Theseira works in motorsport marketing and PR for the accomplished Craft-Bamboo Racing outfit in Hong Kong.

Dávid Nemček is a young Slovak hopeful who started with radio-controlled cars. His pace in digital motor sport caught the attention of 24 Hours of Le Mans competitor and team-owner Miro Konopka, who provided him with a real-life racing opportunity behind the wheel of a Mazda MX-5 one-make cup car. This escapade resulted in Nemček becoming a multiple podium finisher.

Robin Noborg will fly the flag for Sweden. The 27-year-old has a background in kart racing but has since switched his attention to digital competitions. He also remains active in real-life motorsport and has experience of the fearsome Nürburgring Nordschleife.

Fredy Eugster’s beginnings in sim racing were humble: the Swiss started out playing single-player mode on Grand Prix 2 with his PC, using the keyboard for steering. In 2003 things got more serious when he started competing in the online Grand Prix Legends championship in Germany. In 2006 he stepped away from digital motor sport, eventually making his comeback in 2014. His most recent success includes winning the Swiss Simracing Series.

Thailand will be represented by Thananon Inthongsuk, who’s an experienced GT Sport racer. As the winner of this year’s eROC competition, James Baldwin should also be a formidable competitor when he represents the United Kingdom.

The competition will be run on Gran Turismo Sport operated on PlayStation 4 using the same systems developed by Polyphony Digital Inc. for the FIA-certified Gran Turismo Championships. What’s more, it will be held under the supervision of a real-life FIA Race Director and Stewards.

The Digital Cup will be one of six disciplines featured at the FIA Motorsport Games, joining the GT Cup, Touring Car Cup, Formula 4 Cup, Drifting Cup and Karting Slalom Cup. Sporting Regulations are available at fia.com. 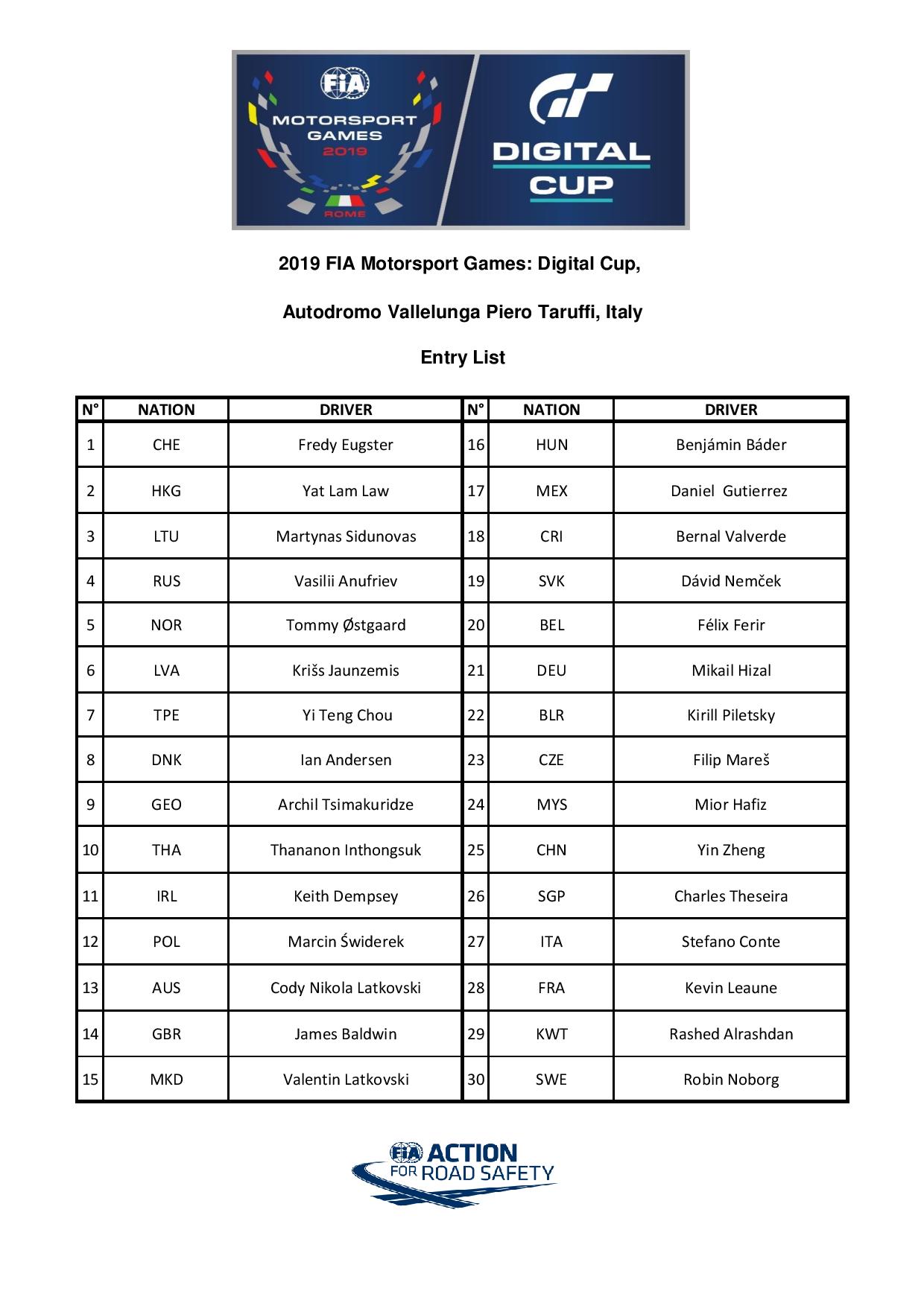