A total of 58 drivers representing 29 nations will compete for Karting Slalom Cup gold when the FIA Motorsport Games is staged next month at Vallelunga Circuit.

Scheduled for 1-3 November, the multidisciplinary event’s inaugural running will feature the entry-level discipline alongside five other categories, with each nation represented by mixed female-male driver pairings. The chosen contenders – who range in age from 13 to 16 – will tackle the Vallelunga slalom course with identical electric-powered karts.

Albania's efforts at FIA Motorsport Games will be focussed solely on the Karting Slalom Cup. The nation's hopes of taking home a medal will therefore rest with 15-year-old Alexia Karaguni and her 14-year-old teammate Kristofor Mjeshtri.

Team Austria's female representative will be 14-year-old Jorden Dolischka, who comes with experience of the CIK-FIA Karting Academy Trophy. Her male counterpart will be Charlie Wurz, whose racing roots run deep: father Alexander clinched two overall Le Mans 24 Hours victories and three FIA Formula 1 World Championship podium finishes, while grandfather Franz was a three-time winner of the FIA European Rallycross Championship. Now, young Charlie is forging his own career in the sport and has this year competed alongside Dolischka in the CIK-FIA Karting Academy Trophy.

Belarus is launching an assault on four categories at this year's FIA Motorsport Games, with the Karting Slalom Cup among the country's chosen disciplines. Kseniya Shuba, aged 15, and 16-year-old Aliaksei Savin will tackle the competition in Belarusian colours.

Team Belgium, meanwhile, will rely upon 14-year-old Manon Degotte, whose experience includes this year's 24 Heures Karting de Francorchamps. She will be joined by 15-year-old Antoine Morlet, who sealed a Belgian junior karting title in 2018. Laci Summer Dyck and Nathan Adilson Farias Arruda Gulden will form the line-up of Belize.

Croatia will field Stefani Mogorović and Sandro Ivanjko at the FIA Motorsport Games after the 16-year-olds topped a qualifying event staged in Zagreb at the end of August. What's more, both drivers come with considerable experience of circuit karting in their homeland.

Team Denmark has ambitious plans for the inaugural FIA Motorsport Games as it tackles five of the six disciplines. In the Karting Slalom Cup the nation will reply on 15-year-old hopefuls Sarah Kronborg Madsen and Jonas Jakobsen. Both youngsters earned their place by excelling in a schools project run by Denmark's National Sporting Authority, the DASU.

France has selected two highly accomplished 15-year-olds for its bid with Doriane Pin, this year's winner of the FIA Women in Motorsport Winfield Award, joined by recently crowned French champion Esteban Masson. Georgia will field 15-year-old Elizaveta Bagramovi and 16-year-old Nika Kobosnidze, with the latter bringing experience in circuit competition as well as at the wheel of karts.

Karting slalom has enjoyed especially rapid growth in Germany, making the nation's line-up of Janina Burkard and Florian Vietze among the favourites for the FIA Motorsports Games. Both have proven their ability this season, with Vietze clinching the German karting slalom title in his age group. Hungary will rely on Dorka Kiss as its female representative, while Bálint Németh is the chosen male driver. Both will be 14 by the time the event gets underway and form part of Team Hungary's five-category programme at the FIA Motorsport Games.

Italy will compete on home turf with Emma Segattini and Paolo Gallo. Experienced kart racer Segattini took the Women's National Trophy in 2018, while teammate Gallo has competed at CIK-FIA World Championship level. Team Kuwait, meanwhile, will travel to Italy with an impressive delegation and is set to rely on Hessa Alfares and Marshad Almarshad in the Karting Slalom Cup.

Latvia will be represented by 16-year-old Emīlija Bertāne and her younger brother Nikolass Bertāns. Both cut their teeth in karts and will return to the discipline for the FIA Motorsport Games, with 14-year-old Nikolass having recently expanded into drift competition. Lithuania, meanwhile, will field 15-year-old Skaistė Petrauskaitė and 14-year-old Kajus Šikšnelis. The latter will arrive at Vallelunga brimming with confidence having emerged as champion in this season's CIK-FIA Karting Academy Trophy.

The presence of Team Mexico ensures that the North American continent will be represented in the Karting Slalom Cup, with 16-year-old Andrea Sierra Ruíz and 15-year-old Flavio Emil Bustamante Abed set to represent the country. The Netherlands will call upon Nina Pothof, a finalist in the Girls on Track Karting Challenge, a competition created by the FIA to promote and develop young female talent in racing. She will be joined by Bastiaan Van Loenen, who comes with domestic and international karting experience.

Norway will be represented by Isabell Rustad and Marcus Myrseth, both of whom command considerable motorsport know-how. The Polish flag will be flown by Sara Sandra Kałuzińska, who like several of her rivals was part of the Girls on Track programme, and title-winning indoor kart racer Krzysztof Gardziel.

When it comes to intra-team understanding Portugal's effort will be difficult to top as 16-year-old twins Matilde and Martim Fidalgo represent their country in the Karting Slalom Cup. Matilde was also among the finalists in the Girls on Track Karting Challenge.

Russia has launched an ambitious FIA Motorsport Games programme, with participation in all six categories, and will call upon 16-year-olds Olesia Vashchuk and Vladislav Bushuev to challenge for Karting Slalom Cup gold. Serbia’s effort will be led by Aleksa Lazarac and Nikola Tošić, two 15-year-olds with significant on-track experience. Slovakia, meanwhile, will field 14-year-olds Barbora Bauerová and Michal Vilim. Bauerová joins the list of Girls on Track participants who will contest the FIA Motorsport Games.

Another of them will line-up for Sweden, with Anna Glaerum having earned a place among the Girls on Track finalists. Her teammate at Vallelunga will be Alxander Spetz, who enjoyed considerable success in his native country before tackling this year's CIK-FIA Karting Academy Trophy.

Among his fellow competitors was 14-year-old Sitavee Limnantharak, who will represent Thailand at the FIA Motorsport Games. Her teammate, 15-year-old Ananthorn Tangniannatchai, has experience in Rotax Max karts and has this year made his first steps in single-seater racing.

Ukraine's efforts at the FIA Motorsport Games will include the Karting Slalom Cup. The nation's colours will be worn by Veronika Kononenko, who will turn 16 before the competition gets underway, and her 15-year-old teammate Heorhii Krasko. Finally, the United Kingdom will be represented by a pair of 14-year-old hopefuls. Jessica Edgar comes from one of the country’s foremost karting families, with grandfather Terry, father Jason and uncle Justin all former British champions. Teammate Samuel Shaw also has extensive domestic experience and has this year contested the IAME Euro Series.

The FIA Motorsport Games is a new multi-disciplinary contest that features six categories: GT Cup, Touring Car Cup, Formula 4 Cup, Drifting Cup, Karting Slalom Cup and Digital Cup. Hosted by Rome and staged at the nearby Vallelunga Circuit, competitors will chase gold, silver and bronze medals in the colours of their national flag. The results of each discipline will produce an overall medal table, with the top National Sporting Authority (ASN) awarded the inaugural FIA Motorsport Games trophy during the closing ceremony. Sporting and technical regulations are available at fia.com. 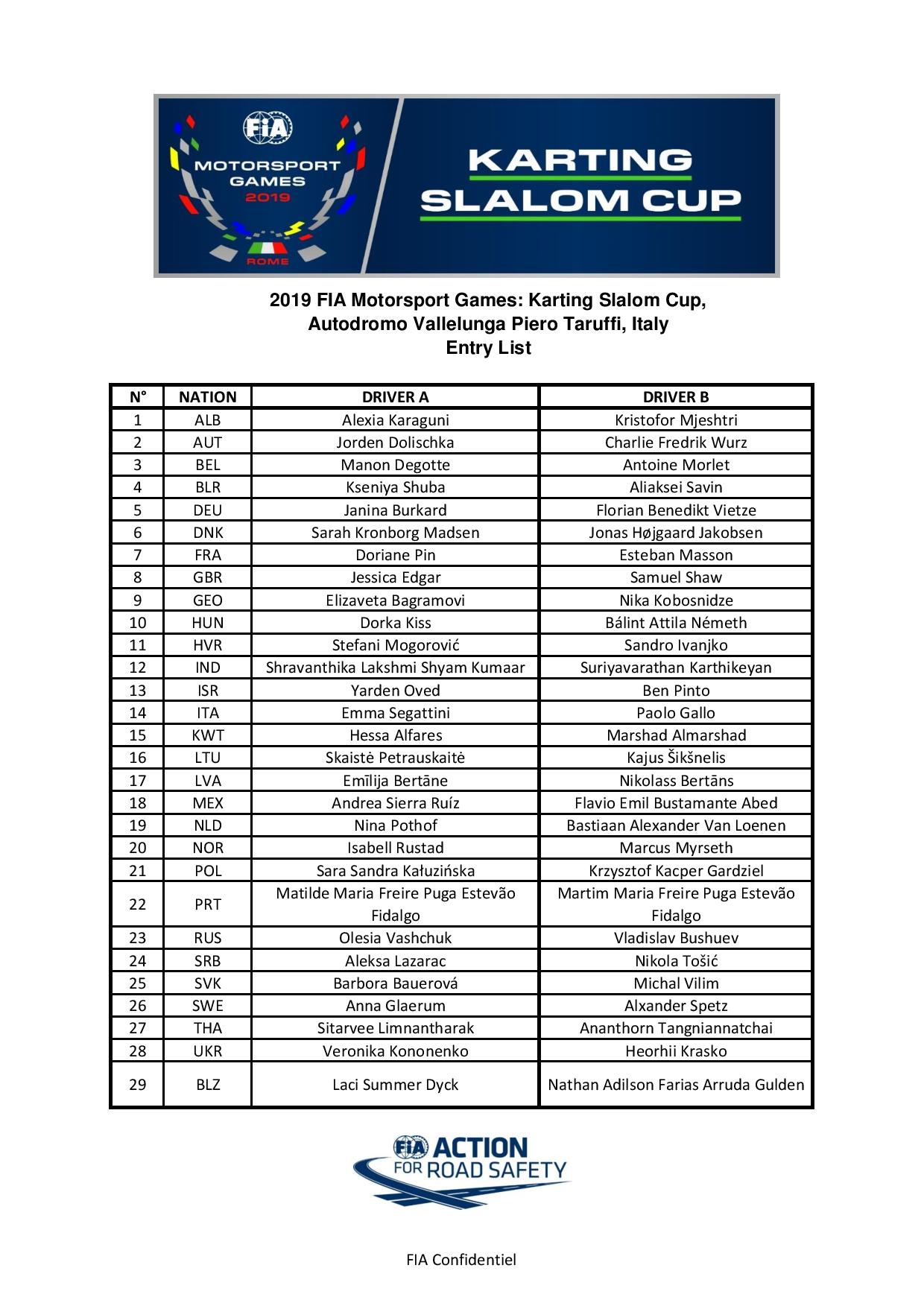