A further seven nations have confirmed their participation in the Drifting Cup category at this year's FIA Motorsport Games in Rome (1-3 November).

The line-ups for Belarus, Lithuania, Italy, Malta, Norway, Romania and Ukraine are now set, with this group joining the initial eight countries that revealed their chosen drivers last week.

Ukraine will call upon one of Europe's leading drift competitors, Dmitriy Illyuk, who will take the wheel of a Nissan 200SX. With a diverse competitive background that includes drag racing and rallying, Illyuk currently contests the Drift Kings International Series. He took victory earlier this season in Hungary and currently sits seventh in the standings.

The Norwegian flag will be flown by Odd-Helge Helstad, who will also pilot a Nissan 200SX at the 1-3 November event. A relative youngster by drift standards, Helstad will turn 23 next month but has already enjoyed notable success in the discipline. He became Norwegian junior champion in 2014 and in 2016 won the Norwegian Powerdrift series, before adding the senior Norwegian title in 2017.

Romania will call upon Vlad Andrei Stanescu, who will chase the gold medal in a BMW M1. Competing in the familiar colours of his national flag, Stanescu comes with valuable experience in the leading Drift Masters European Championship

Lithuania's representative will be Benediktas Čirba. He will also drive a BMW, choosing the E46 model for this year's FIA Motorsport Games. Like his Romanian counterpart, Čirba also comes with experience in the Drift Masters European Championship and currently sits eighth in the 2019 standings.

Neighbouring Belarus will be represented by Dzmitry Nahula. He will drive the popular Nissan 200SX at the event and represents the third Belarusian entry to be confirmed alongside efforts in the GT Cup and Karting Slalom Cup categories. What's more, with Russia, Georgia and Latvia among the original group of entries, and Ukraine, Lithuania and Belarus now confirmed, there is impressive representation for Eastern Europe in the Drifting Cup.

The same will be true of the Mediterranean region, as Italy and Malta complete the second round of entries. The Maltese effort will be spearheaded by Kane Pisani. A contender in Drift Open, his car of choice is a Toyota Supra.

Team Italy will also field a Toyota, with Federico Sceriffo using the GT 86 model for his home event at Vallelunga. A native of Milan, Sceriffo has more than 15 years' experience as a drift competitor. Among his career highlights, the Italian has earned success in D1GP, the International Drifting Champions Cup and the Red Bull Drifting Battle.

The contest will be staged under the lights on Friday and Saturday evenings, utilising part the main straight and the complex between turns 10 and 14 at Vallelunga Circuit near Rome.

The Drifting Cup will be one of six categories featured at the FIA Motorsport Games, joining the GT Cup, Formula 4 Cup, Touring Car Cup, Karting Slalom Cup and Digital Cup. Competitors from across the globe will chase a spot on the podium, with gold, silver and bronze medals awarded to the top-three finishers in each event.

These results will produce an overall medal table, which will see the top National Sporting Authority (ASN) presented with the inaugural FIA Motorsport Games trophy during the closing ceremony in Rome.

Further entries will be announced next week, with the eventual grid expected to be close to the 24-car capacity. 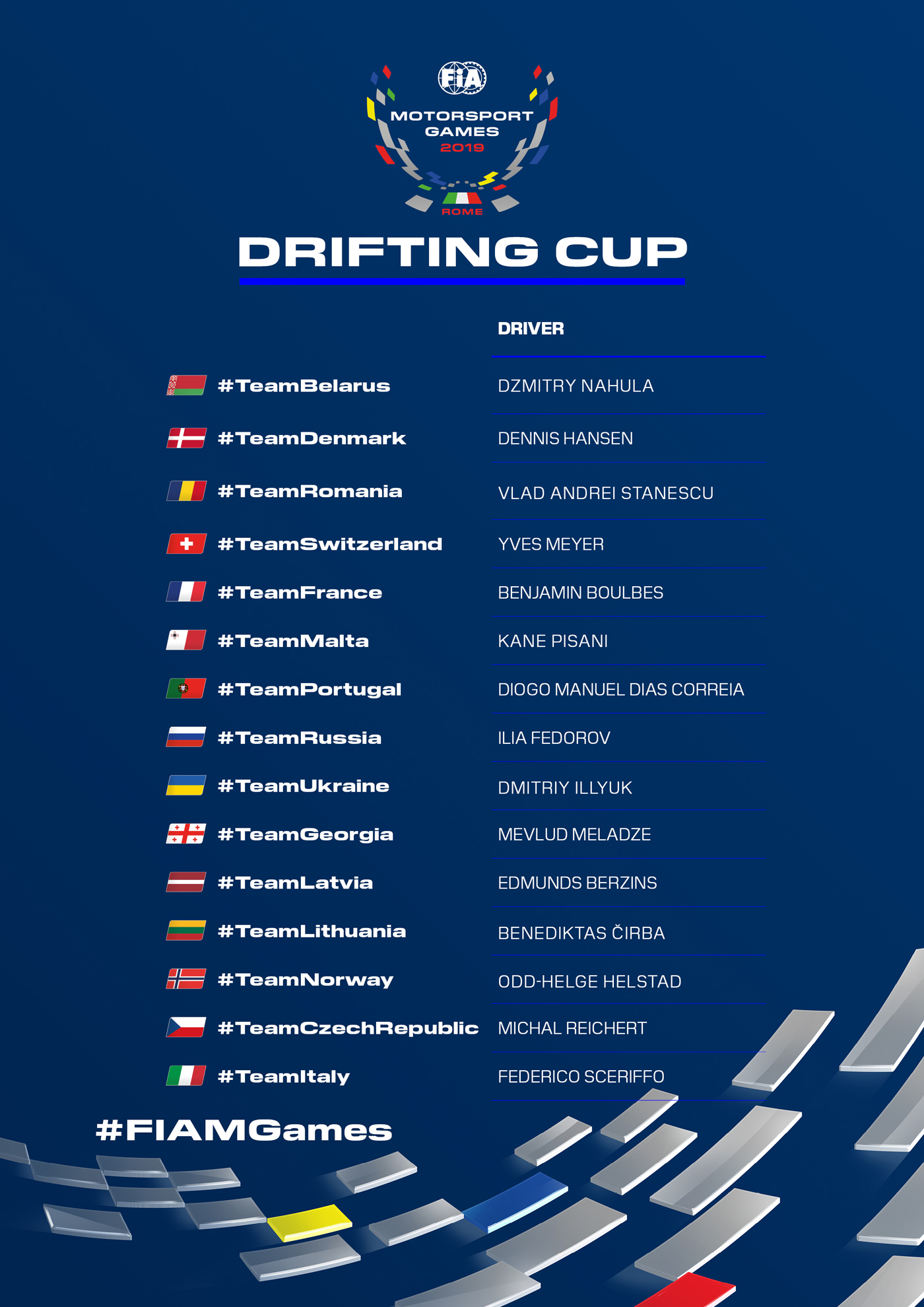