The GT Cup grid for the inaugural FIA Motorsport Games has expanded to 17 entrants following the confirmation of an additional six line-ups for the 1-3 November event at Vallelunga Circuit near Rome.

Australia will be represented by the same crew that tackled last year's FIA GT Nations Cup, the international contest that laid the foundations for the multidisciplinary FIA Motorsports Games. Stephen and Brenton Grove will handle driving duties at Vallelunga, with Herberth Motorsport operating a Porsche 911 GT3 R for the father-son duo.

Stephen Grove is the senior member of the team and comes with significant seat time in Porsche machinery. The Victoria native has secured four class wins at the Liqui-Moly Bathurst 12 Hour, all of which have been achieved with the Stuttgart brand, and competed extensively in Porsche Carrera Cup Australia and the premier Porsche Supercup category.

Brenton is already a veteran of Porsche equipment at the age of 22, having shared two of his father’s Bathurst wins and earned victories in Porsche GT3 Cup Challenge Australia. In addition to his GT exploits, the youngster also competes in the Super2 Series, the development category for the country's premier Supercars Championship. The Australian squad is the third to confirm a father-son driver pairing following similar announcements by Belarus and Italy.

Poland's medal hopes will rest upon Andrzej Lewandowski and Artur Janosz, who will tackle the FIA Motorsport Games using a Lamborghini Huracan GT3 prepared by Vincenzo Sospiri Racing. Lewandowski has already enjoyed notable success with the Italian outfit, driving a Huracan to the International GT Open Am class title in 2018. He is also a Lamborghini Super Troefo class champion and has more recently competed in the Blancpain GT Series.

26-year-old Janosz also knows how to handle a Lamborghini having captured the overall Super Trofeo Asia title last term. Prior to this the Polish racer competed in various high-level single-seater categories such as the FIA Formula 3 European Championship, GP3 Series and Euroformula Open, finishing as runner-up in the latter in 2014.

The United Kingdom will call upon Flick Haigh and Chris Froggatt at Vallelunga, with the British duo set to pilot a Ferrari 488 GT3 operated by brand specialist AF Corse. Haigh can lay claim to a brace of significant achievements in the highly competitive British GT championship, having become the first woman to take overall race victory and title honours in 2018. This year she has competed in the Michelin Le Mans Cup as Haigh works towards her goal of tackling the French endurance classic.

She will be partnered at Vallelunga by Froggatt, who comes with vast experience of Ferrari equipment. His CV includes a superb run at last year's FIA GT Nations Cup, where Team UK challenged for victory and eventually finished as runner-up. This term he has competed in a variety of categories, including the Blancpain GT Series and International GT Open, at the wheel of a 488 GT3.

Team Germany will compete with a Porsche 911 GT3 R which, like the Australian effort, will be operated by the accomplished Herberth Motorsport outfit. Its driver line-up consists of Steffen Görig and Alfred Renauer, both of whom are well acquainted with the Stuttgart marque's GT machinery.

Görig has driven Porsches in a variety of series across the globe. His recent exploits have included outings in the European Le Mans Series and at this year's 24 Hours of Daytona, where he shared a Herberth-run 911 GT3 R with FIA Motorsports Games teammate Renauer. The second German driver has also clocked up many competitive kilometres at the wheel of Porsches. Renauer’s extensive CV includes appearances in IMSA, the Blancpain GT Series, ADAC GT Masters and the 24 Hours Series – all within the past two seasons.

His teammate is among Malaysia's leading international drivers. Still just 24, Tan has competed in single-seater championships in Europe and the United States, earning multiple race wins on the competitive Road to Indy ladder system. He has since tackled the FIA World Endurance Championship and currently races in Blancpain GT World Challenge Asia, where he has once again demonstrated his winning pedigree.

Finally, Chinese Taipei has revealed the line-up for its GT Cup assault, which will be operated with support from Gama Racing. The squad will use a Lamborghini Huracan GT3 at the event, with the experienced Hanss Po Heng Lin making his return to international competition. He will be joined by 25-year-old Evan Chen, who is currently contesting has second season of Lamborghini Super Trofeo Asia with the Gama Racing squad. Chen finished as series runner-up last term and occupies the same position this season, though with only a two-point deficit to the leaders ahead of the season finale he will hope to travel to Rome with the title to his name.

Further entries will be announced next week prior to the entry list being finalised. Sporting Regulations are available at fia.com. 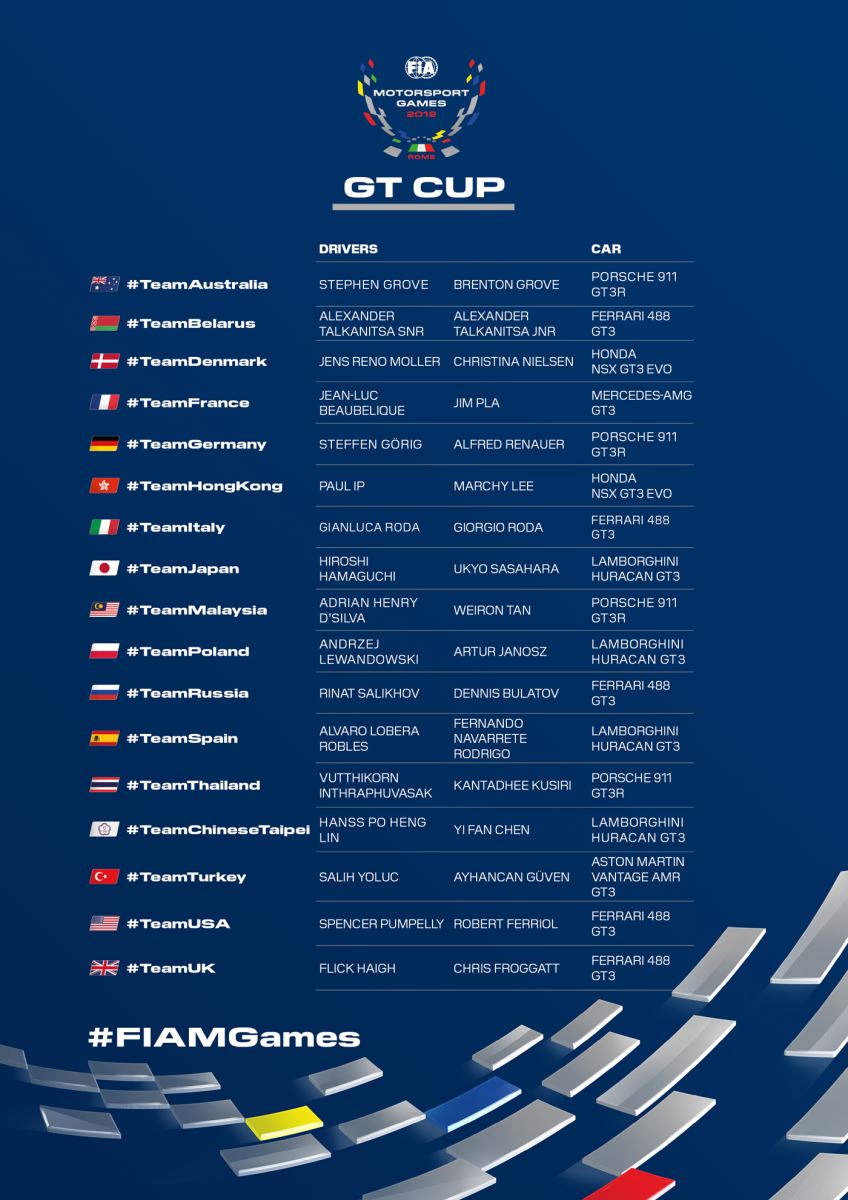